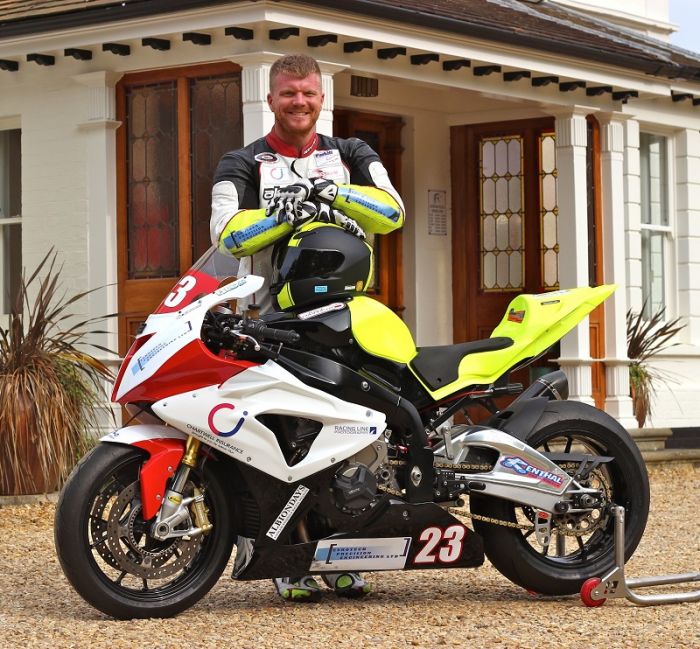 Disabled motorcycle racer Mark Fincham has got his season off to a good start, thanks to a little help from his dad.

Mark, a former Marine whose leg was amputated after a road crash in 2007, is lying in second place after two rounds of the MRO 1000 Clubman series, and fifth overall in the MRO Powerbike class.

But he owes his place on the grid in part to his father Colin, as well as sponsors Chartwell Insurance, for providing a replacement bike while Mark’s number one racer is being repaired.

“He very kindly gave me his own bike to race, though I think it was so he had a good excuse to upgrade to the newer model himself,” joked Mark, who is hoping to move up to the British Superstock 1000 series later this year if all goes to plan.

Gerry Bucke, general manager at Chartwell, said they were delighted to sponsor Mark for a third season.

“Mark has shown great determination to come back from his accident, and we’d love to see him improve on last year’s finish and move up to the next stage in his career,” he added.

After a few tweaks to his borrowed bike Mark has hit the ground running, taking second in class and 10th overall at Brands Hatch before heading to his home track at Snetterton last weekend.

After employing the help of a professional suspension technician to get the balance of the bike right, Mark qualified second in class and sixth overall in changeable weather that made tyre choices tricky.

The weekend’s racing is made up of four points-scoring races, with Mark taking second and fifth overall in race one before shock absorber problems were identified prior to race two.

“I’d noticed that my bike was making wallowing shapes out of corners and was hard to hold a tight line, making it impossible to get hard on the throttle out of the corners,” he said.

“We checked the rear shock and it had been leaking hydraulic fluid, so the stiffness it was meant to have wasn’t there and it was just bouncing around on the spring. We tried to compensate this with other settings  as there wasn’t time to rebuild the shock.”

Despite this, Mark again took second in class and fourth overall, recording the fastest lap in the Clubman class – a full second faster than his own previous best.

It was the same final outcome in race three, with Mark having a titanic struggle with a faster bike and again knocking more than a second off his previous best.

Starting third on the grid in race four, Mark was having trouble with tyre grip – at speeds of more than 160mph…

Battling to hold on to fourth place overall, Mark takes up the story: “On the last lap I was passed by a bike on the straight, and as we were coming up to the first corner at over 160mph, all that went through my mind was ‘I’m not braking until I’m in front of him’.

“Somehow I got it round the corner, holding him off all through the infield twisty section. On the back straight he passed me again and back on to Corram’s I was looking at a last minute dive when he missed the apex by about 1ft.

“That was enough of a gap for me, again hanging off the bike with elbow skimming the floor and the rear sliding as we went round, I took a defensive line into the flick left, I’d built enough of a gap to hold him off down the straight to keep of fourth overall and second in class.”

Mark now heads to the next meeting at Silverstone on May 10 and 11, with a rebuilt shock absorber.

He said: “I can’t thank all of my sponsors enough for sticking with me after 2013 – Bikesure, Chartwell Insurance, Eurotech Precision Engineering, Albiondays and Parkitt Racing. Also to Steve Jordan of Steve Jordan Performance for the suspension work.”

Chartwell can provide competitive insurance cover for disabled motorists and motorcyclists, with tailormade policies for adapted vehicles and bikes, plus home insurance and mobility scooters. Find out more at www.chartwellinsurance.co.uk