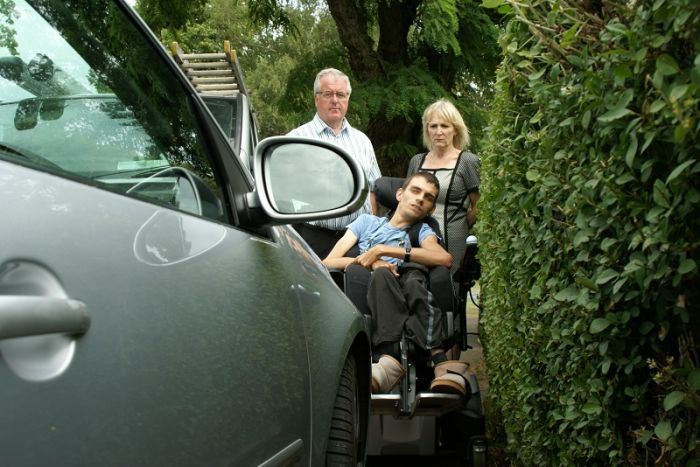 A Harrogate wheelchair user has launched a campaign to make people across the district think twice about obstructing footpaths with vehicles and wheelie bins.

Nick Moxon – who lives at Disability Action Yorkshire’s residential home on Claro Road – has now called on Harrogate Borough Council, local councillors and the police to help him make the streets more accessible for those with mobility issues.

His decision to make a stance came after frequently finding his path into Harrogate town centre blocked by vehicles and other obstacles, including wheelie bins.

Nick, who gets about via a robust electric wheelchair, said: “Drivers should be more considerate when it comes to parking their vehicles on footpaths.

“Sadly many don’t think who their thoughtlessness will affect, as they are often too busy trying to avoid getting their cars scratched!

“Obstructions affect not just wheelchair users, but mothers with pushchairs, the visually impaired and those with general mobility problems.

“My campaign is to make people more aware of the problem, and to make footpaths better for the wider community.”

He added: “On numerous occasions I have either had to go out into the road or ride over grass verges. It can be extremely difficult for me to manoeuvre, and I often get mud on my wheels, which is then brought into the home.

“Although most drivers are apologetic and quick to move their cars when confronted, I shouldn’t need to ask them in the first place.”

Coun Fox: “This is a recurring problem across the town and one that does need addressing. Together we have met the local police community support officer to raise our concerns.

“In addition, the council’s refuse collectors have been asked to put wheelie bins on verges and off pavements once they have been emptied.

“The police have said that whilst it is not illegal to park on pavements, it is illegal to block the footpath, and this is when they will take notice.

“A blocked footpath means pedestrians have to use the road to get past, which is both dangerous and unnecessary.”

Find out more about Disability Action Yorkshire at www.disabilityactionyorkshire.org.uk

Time to Give Back: Accessible volunteering