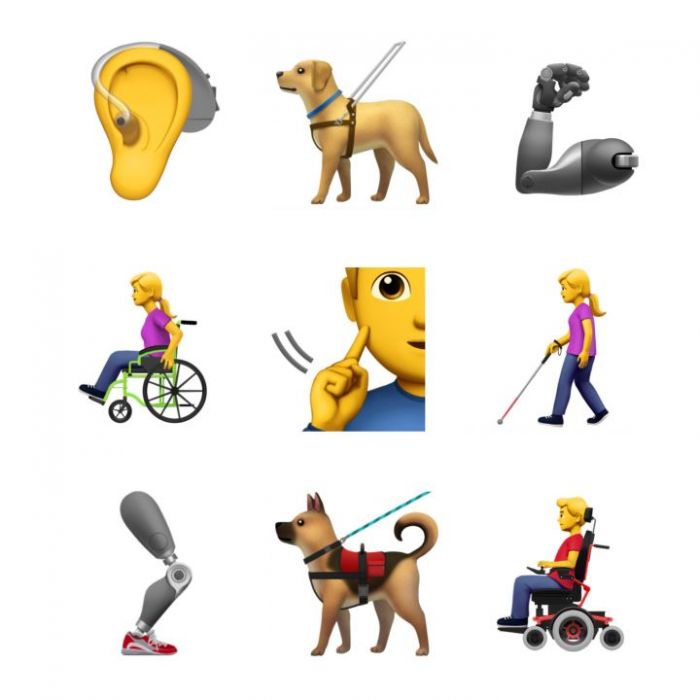 There is an emoji of a dumpling, a genie, and a VHS – but when it comes to disability, the emojis haven’t been updated in a while. There are only a couple of wheelchair ones.

Until now. Apple has heard our calls for change and has mocked up some emojis to represent the disabled community – approximately 20% of the UK’s population whereas genies make up approximately 0% – and have submitted it to the company which makes emojis, Unicode. If the emojis get approved, then we should see them next year.

The tech giant said: “One in seven people around the world has some form of disability, whether that be a physical disability involving vision, hearing, or loss of physical motor skills, or a more hidden, invisible disability. The current selection of emoji provides a wide array of representations of people, activities, and objects meaningful to the general public, but very few speak to the life experiences of those with disabilities.”

There are 13 new emojis in the pipeline, including people using canes and wheelchairs, a prosthetic arm and leg, guide dogs, and a hearing aid. Once different skin tones are in the mix, we’re talking 43 new emojis.

“This new set of emoji that we are proposing aims to provide a wider array of options to represent basic categories for people with disabilities. This is not meant to be a comprehensive list of all possible depictions of disabilities, but to provide an initial starting point for greater representation for diversity within the emoji universe,” says Apple.

Speaking as a disabled person, it’s hard to overstate the significance of Apple’s accessibility emoji proposal. They aren’t a bunch of cute pictures. These are going on hundreds of millions of devices. People *will* notice them. The awareness meter will go up exponentially.

There’s still more to be done to have a completely inclusive representation in the world of emojis, but it’s a great step in the right direction.