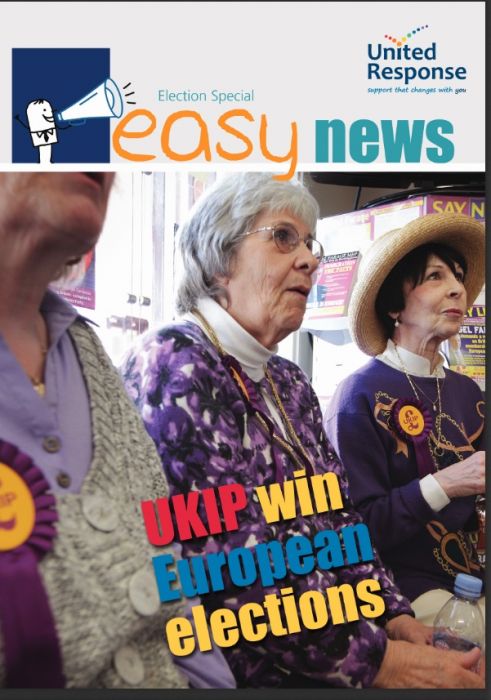 The national disability charity, United Response, has published an easy read summary of the European and local elections today. Using simple words and images, the publication aims to make the voting results more accessible to the 1.5 million people with learning disabilities in the UK.

A bi-monthly magazine, Easy News was created to make the events in the news and political debate more accessible, and so make it easier for people with learning disabilities to follow developments and express their opinions.

Most people with learning disabilities are eligible to vote, yet turnout at elections remains incredibly low, as has been shown through figures from United Response’s Every Vote Counts campaign, which found that as few as 16 per cent of those with learning disabilities who were registered to vote actually did so in the last general election; a stark contrast to the national turnout of 61 per cent. United Response hopes that Easy News will help people to become better informed by encouraging debate around the issues covered in the magazine, and so make voting more relevant to people’s lives.

When United Response first launched Easy News, it asked readers if they felt that politics made a difference to their lives. Back then, only 31 per cent felt that politics did make a difference. A year on and the figure has risen to 78 per cent – a 150 per cent increase. At the same time, 90 per cent of readers have said that they find Easy News easier to understand that other newspapers or news on TV. This suggests that a greater understanding of the basic workings of politics and news within the political system breeds greater enthusiasm for political involvement.

One respondent told us: “Politicians decide so much stuff on our behalves and they are not always right. Many newspapers seem to have political leanings and I need to make up my own mind, not just agree with what somebody else said.”

Speaking about Easy News, Diane Lightfoot, director of communications at United Response, said: “People with learning disabilities should have access to the same information as the rest of society. Without news being presented in an easy to understand format, it can be difficult for people to know what is going on in the world and to develop and express an opinion.  We hope that Easy News will empower people so that they can make an informed vote at election time.”

To download the Easy News special on the election result, and to find out more about Easy News, go to www.unitedresponse.org.uk/press/campaigns/easy-news. To find out more about United Response’s Every Vote Counts campaign, and how to make voting more accessible for people with learning disabilities go to: www.unitedresponse.org.uk/press/campaigns/every-vote-counts

United Response is a community based charity that works with people with learning disabilities, mental health needs or physical disabilities- including some of the most vulnerable people in our society. To find out more about the work of United Response, please visit: www.unitedresponse.org.uk

Exactly one year from the General Election 2013, charity launches Election Planner to get disengaged groups voting

Adults with learning disabilities must be listened to on abuse