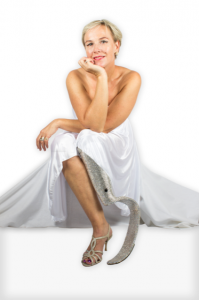 Belinda Gatland slips on a crystal encrusted running blade, glittering proof that anything is possible with design and innovation.

This stunning crystal incrusted prosthesis was designed to be worn for a charity photo-shoot by our client Belinda Gatland, who had her left leg amputated after a horse-riding accident. Inspired by Marilyn Monroe’s well-known phrase ‘Diamonds are a girls best friend’, Bob Watts worked closely with GlamSticks to create this running blade, encrusted with Swarovski® crystals.

Bob Watts comments: “We wanted to create something that looked glamorous. Belinda had the idea for something sparkly and feminine so we worked with the great team at GlamSticks to turn her dream into a reality.”

Belinda modelled the crystal leg recently for a Marilyn Monroe style photo-shoot to re-enact one of the most iconic images of the 20th Century; the infamous moment when Marilyn’s white dress blows up as she stands over a subway grate. The renowned image was captured over 60 years ago, on the 15th of September 1954 on set of the film ‘The Seven Year Itch’. To mark the 60th anniversary Belinda has posed for some stunning images to showcase the sparkly leg and reinforce the message that your prosthesis is beautiful.

Belinda comments on the sparkly prosthesis: “I feel a bit like Cinderella as I am the only person in the world whom it fits! It is quite surreal as people come and take photographs of it, it is truly beautiful.”

Belinda had her left leg amputated after years of operations to try and correct damage that resulted from a horse-riding injury. Now, with a standard running blade from Dorset Orthopaedic she lives an active life in Dubai and  continues to work with horses as an Equine Sports Massage Therapist, keeping horses in good physical health.

Belinda comments: “You go on a journey when you have your leg amputated and at first you want to hide it, but then after a while it becomes part of you and to me my blade is a thing of beauty.”

Belinda feels it is important to accept and love your prosthesis as part of you. She wears her day-to-day prosthesis for work but wears a running blade when she is wearing a heel and likes to show it off, even adding touches of bling and glam to her socket with ribbon and gems so it looks the part when she is wearing an evening gown!

“I like to show my prosthesis off – it is an important and amazing part of me!”

Bob Watts worked closely with GlamSticks who completely encrusted the running blade, leaving only the very bottom of the footplate un-covered for balance. Despite being decorated with thousands of crystals the crystal leg is  in fact lighter than a standard running blade as it is only 985gms compared to a standard leg, which is 1200gms. This is because Dorset Orthopaedic have invested in the research and development of pre-impregnated carbon  fibre and opened a New Carbon Technology lab in 2013. Revolutionising prosthetics and orthotics by significantly reducing their weight and functionality, the technology uses pre-impregnated carbon fibre to create pioneering new products.

“A prosthesis is an amazing piece of innovation, a work of art, and it almost becomes an accessory that you want to show off – and why not? Why not have some fun with it?” (Belinda Gatland)

Find out more about Dorset Orthopaedic at www.dorset-ortho.com

Popz and Aqua Popz from MERU

Get clued up before you buy