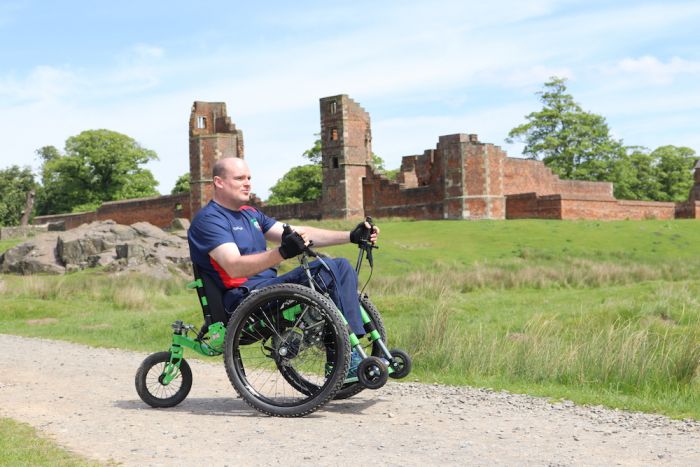 David Needham, has always been into sport, right from a child he played all sorts of sport but principally cricket, rugby and football.

He played sport regularly until he was 39 when he started to notice he was picking up a lot of injuries. At the time he put this down to natural ageing. The injuries caused him to stop playing altogether and disappointed as he was, he accepted this and got on with other aspects of life.

David is now 46 and lives with his wife and three young children in Cold Newton, Melton Mowbray. He talks about coming to terms with his condition and why he is taking on the Yorkshire Three Peaks challenge.

“It was two years later that I started to notice other issues. I had for the most part recovered from the acute nature of the injuries, but some everyday things were becoming more difficult. The definitive moment being an incident while crossing a road in a town local to me called Syston. It was on a pelican crossing and as I crossed I became aware of a car approaching from my left that wasn’t slowing down. Being halfway across the road I decided the best course of action was to break into a swift jog and avoid the potential incident. Only when I tried, I just could not co-ordinate a run. I kind of staggered and almost tripped over my own feet. Thankfully I avoided the car which continued on without slowing, but the whole things must have looked bizarre to any onlooker.

“Anyway, I did the typical bloke thing and didn’t go and see my GP. This despite my wife strongly suggesting that I should. About 8 months later I was pushing one of my youngsters through Melton Mowbray and I was having difficulty getting her pushchair up and down kerbs. It very quickly became evident that I was the problem and not the pushchair. I found that I could no longer support my body weight in lower part of my left leg, as I stepped up and down kerbs. With this my wife then insisted that I go to my GP.

“Onto the consultation with my GP where I described everything to her. With my sporting history she initially suggested referring me to an orthopedic surgeon, but I had already thought long and hard about what was going on and suggested to her that whatever the problem may be, I didn’t think it was an out and out mechanical issue (I had half jokingly already suggested to a good friend and my Rugby Club that this could be MS, or even MND. At the time he thought I was kidding around and laughed). Her response was to suggest a referral to a neurologist and things went from there. Just over 2.5 years later (Feb 2014 ) Motor Neurone Disease (MND) was confirmed.

“Fast forward nearly two years to December 2015 and from a sporting perspective I was getting very itchy feet (albeit feet that no longer function. In fact below the knee in both legs I am almost totally paralysed). Kate (my wife) picked up on this and suggested giving wheelchair rugby a try. Kate works for Leicestershire Police and Leicester Tigers WRC train at a gym on her beat. At this time I was struggling to get over the mental hurdle of becoming a wheelchair user and was insisting on continuing to use crutches and braces on my legs. Kate thankfully convinced me to go along to a training session. Well, I was hooked after that first session. The guys at the club very quickly showed me that my insistence on not using a wheelchair was a ridiculous stance in that becoming a wheelchair user actually opens doors, rather than closes them, as I perceived.

“Over time I noticed that although my condition continued to progress slowly, playing sport was countering many of the symptoms. It was evident that I was doing better than other people that I’ve met with the condition. Now some of this is just luck and I do consider myself lucky, but I’m convinced that at least some of this luck can be attributed to sport. So I started to think about what else of what I had lost to the disease could I potentially claw back. One of my first thoughts regarding this was long walks with my young family. I hadn’t done anything like this for 2 years, or more. In fact, it occurred to me that the two youngest children had never really been out on a long family walk. So I sat down one day and Googled ” All Terrain Wheelchair ” and top of the list was Mountain Trike. I visited the website and my research went no further. I could see that a Mountain Trike was exactly what I needed. I dropped an email over asking if it was possible to pop over and try one out and within a couple of weeks I had visited and tried a Mountain Trike. From that point I knew that I had to have one. It was just a case of figuring out how we could afford one. Luckily ( again ) SF Charity offered to part fund the purchase and the balance came from a fund setup by Chris Brown a colleague of Kate’s.

“I was able to hire a Mountain Trike when we went away to Cornwall for a week last October. Handing it back knowing that my Trike was still several weeks away was a very difficult thing to do. I was ecstatic when my Mountain Trike did arrive in December 2016.”

Since then David decided he wanted to take on a challenge using his off-road wheelchair, while helping others who are in a similar position to him. In August 2017 he will be pushing himself to the limit as he takes on the highest three peaks in the Yorkshire Dales. The challenge will come just three years after David was officially diagnosed with MND – a condition that progressively damages the nervous system, that leads to paralysis and is invariably fatal.

“The way I looked at it when I was diagnosed was I have two choices; I can give up or carry on and I never had any intention of giving up,” said David.

“Training for this has done me the world or good, both physically and mentally and hopefully this will be the first of many challenges. I’m currently visiting the gym 2-3 times a week and weather permitting a 2 x 4 hour session out on my Mountain Trike at various sites around Leicestershire that has challenging terrain – which I’m increasing over the coming weeks.”

The Mountain Trike has given David his freedom back and the things he had lost and assumed would never get back.

David will be climbing alongside fund-raisers on foot and raising much needed funds for both LOROS (local hospice care) and the Leicestershire and Rutland MNDA with the aim to raise £10,000.

David goes onto say: “I’m repeating myself I know, but I do consider myself extremely lucky. I have met many others with MND since my diagnosis and several have sadly passed away over this short period. For many the disease’s progression is so swift, equipment and assistance that can help sufferers and their families cannot be sourced and supplied in time via traditional services. Along with other charities the Leicestershire & Rutland MNDA do their very best to negate this issue and LOROS provide many of the facilities that the MNDA function out of. I would very much like to help them, help others.

“It is my intent to raise funds for other charities in the future. Charities such as the Treble One Trust, a charity setup to help MND sufferers and their families in Leicestershire. I would also like to do something for the Matt Hampson Foundation and if my health allows, in the future I would very much like to raise funds specifically to help people who would benefit from using a Mountain Trike to gain access and perhaps own a Trike of their own. I have done several unofficial MT promotions using my Trike and it is evident that there are many people out there, with various conditions that would benefit from access to a Mountain Trike and could very well improve their condition by using one.”