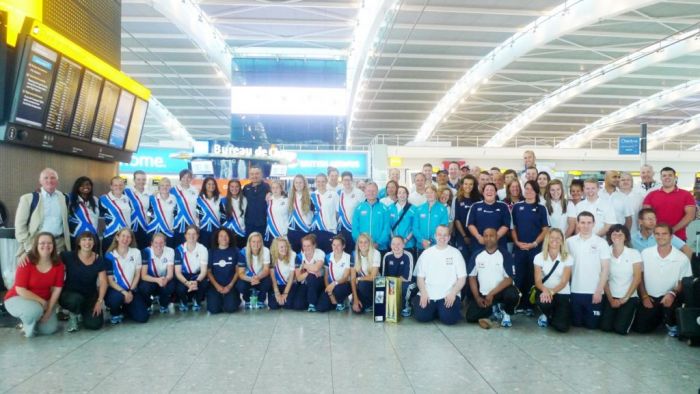 The 22nd Summer Deaflympics have officially begun with the  opening ceremonies taking place at Arena Armeec in Sofia Bulgaria.

After months of vigorous training and dedicated fundraising, the Team GB athletes are ready to take on the best deaf athletes from around the globe to proudly represent GB in the games. Competing in athletics, badminton, cycling, karate, shooting, swimming, tennis and women’s football, the 49 athletes have been long awaiting their opportunity to bring home a medal from the world stage.

Here is a look at the confirmed DeaflympicsGB schedule: http://www.ukdeafsport.org.uk/uploads/TeamGB_timetable.pdf

Power couple Cathy and Lewis Fletcher not only carry a list of accolades of their own, but have also won Bronze in doubles tennis in the European Deaf Championships in Germany in 2012. Hungry to win gold, they have been training extensively over the past few months and feel energised and prepared for the games. Both athletes will be competing individually today before teaming up to compete in the doubles event on Saturday 27th July. The only other event today of relevance to Team GB is shooting, in Which Rob Lowe hopes to prevail.

Competing in Athletics, Mel Jewett is one to watch having just won Bronze in last weekends 13th Königsschlösser Romantic Marathon. While GB Captain, Bethan Lishman, carries the title of number one Hammer Thrower in the UK and number four in the world. The athletics element of the games will commence from Tuesday 30th July onwards. John Ruddy, a young Team GB athlete, has set himself the personal goal of bringing back two gold medals- lofty expectations from an athlete that has every right to aim high.

Tom Smith, Bronze medalist in the 50km Points Race in 2012, is major contender in the Deaflympics Cycling. Despite having major injuries from an accident in 2004, Tom is a proven success story and looks to continue his imperious rise on Saturday 27th July in the 1000m sprint.

As the youngest GB competitor in the games, 16 year old Oliver Kenny is hoping to build on his growing reputation as a very promising young athlete in swimming. Having competed in the Deaf World Championships in Portugal when he was only 13, Oliver is ready to prove himself as an impressive and qualified contender, starting with the heats on Saturday 27th July.

With women’s footballstars such as Mandy Tobin and Chloe Lockey, the GB girls football team enters the tournament in fine form and look to capitalise on high confidence levels as they enter the Deaflympics, their first game vs Russia will take place on Sunday 28th July.

The Deaflympics was first held in Paris, 1924, making it the second oldest multi-sport and cultural festival in history- second only to the Olympic Games. It is remarkable, therefore, that the wider international community often overlooks this event.

International multisport competition always carries with it a sense of the grand and evokes a great sense of passion and pride amongst athletes and supporters alike- one need only look at the incredible success of London 2012, particularly the Paralympics. The Paralympics’ origins as rehabilitation program for injured soldiers in World War Two offers no capacity for deaf athletes to partake unless they enter under their ‘other’ disability. The International Olympic Committee (IOC) recognises the Deaflympics on a par with the Paralympics and UK Deaf Sport (UKDS) manages the GB Deaflympic team to ensure that competitors have the best support available during preparations and competitions.

Discovering inclusivity at the Laureus Sport for Good Summit