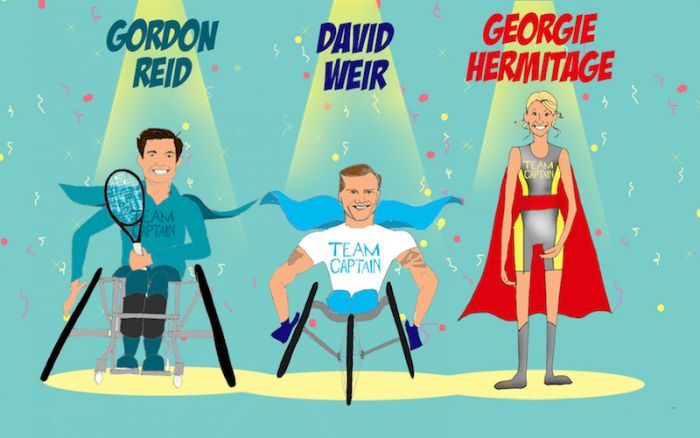 The hottest challenge of the year just got even hotter! Three true giants of the sporting world will be donning mask and cape and competing against more than 20 Paralympians and TV personalities who will be teaming up with members of the public for the Celebrity Superhero Tri at Dorney Lake on 19 August.

The Celebrity Superhero Tri is one of many unique challenges at the debut event in the Superhero Series, the only sports series dedicated to the ‘Everyday Superhero’ – the UK’s 12 million people with disabilities and long-term injuries.

Fresh from his seventh record-breaking win at the London Marathon this weekend, the six-time Paralympic champion will be bestowing his mythical ‘Weirwolf’ magic on series Super Sponsor #TeamBarclays, as Team Captain. Tennis Titan Gordon Reid will be heading up rival #TeamGatwick and Paralympic champion and 400m world record holder Georgina Hermitage is waving the flag for #TeamStonegate.

They’ll be joined by a whole host of Paralympians and TV personalities, from Hannah Cockcroft and Kadeena Cox to Adam Hills and JJ Chalmers. The celebrities are taking part to show their support for a series that throws out restrictive rules and regulations that can prevent or deter many people with disabilities entering mass-participation events.

The unique challenges are designed to encourage the ‘Everyday Superhero’ to fly solo or team up with family and friends to do as much or as little as they wish, with as much or as little support as they need. The Celebrity Team Captains will unite with two competition winners on the day to complete a stage each of the Celebrity Superhero Tri relay (150m swim, 3k bike, 1k push/rush).

Team Captain David Weir said: “I can’t wait to let off steam and take on a challenge just for fun for a change. That said, my team will still win of course!”

Paralympian and series founder Sophia Warner said: “It’s amazing that so many big names are taking on this challenge to help highlight the need for more gutsy events that give ‘Everyday Superheroes’ the opportunity to take on an inspirational goal. What an epic race it’s going to be!”

Members of the public can still join this titanic clash. Paralympic champion Susie Rodgers and international surfer Chris Jones are looking for teammates to join them. For a chance to to win a place on #TeamSusie and #TeamChris visit superheroseries.co.uk/team-captains-1/. Competition deadline 31 May 2017. For a chance to join David Weir’s team visit barc.ly/2oDcZYE. Competition deadline 30 April 2017.