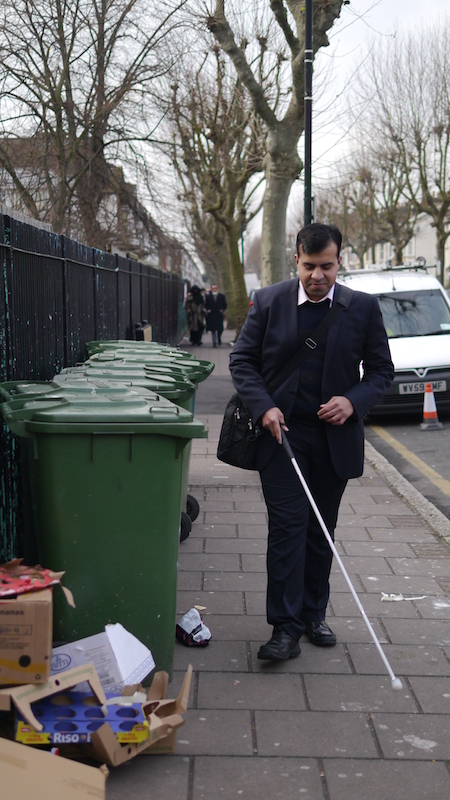 Thousands of blind and partially sighted people are being injured as they walk around their local streets, leaving many of them without the confidence to get out and about

New research by the Royal National Institute of Blind People (RNIB) has highlighted the growing problem of street obstacles; bollards, advertising boards, bins, and cars parked on pavements, which are preventing many people with sight loss from getting out and about.Dangerous street crossings and ‘shared space’ schemes are also a significant problem.

Survey results published in RNIB’s ‘Who put that there’ report revealed that a third of blind and partially sighted people across the UKhad injured themselves when walking around their local areas. Overall, 95% of people said that they had collided with an obstacle.

Over two million people live with sight loss and this number is set to rise to four million by 2050. Instead of our streets becoming more accessible, they remain a daily obstacle course.

Bob Potter from Northumberland told us: “I could show you the bottom of my legs. I have a fair amount of bruising, cuts, and old scars from walking into advertising boards.”

Mohammed from London added: “Bins are a big problem. I have hurt myself so many times. I sometimes get abuse from people down my street, because when I knock into the bins they sometimes fall over and damage the cars.”

Fazilet Hadi, Director of Engagement at RNIB, said: “People with sight loss should be able to walk to the shops, see friends or visit the doctor’s in the same way as everyone else.

“We shouldn’t have to fear bumping into obstacles or not knowing where the kerb is. Local authorities need to take steps to make streets safe for their blind and partially sighted residents.”

While there are current laws covering the issue – the Highways Act, the Equality Act, and guidance from the Department of Transport – it is clear these are not always followed.

A recent freedom of information request (FOI) by RNIB reveals that most local authorities in England do not fully appreciate the impact their street and highway policies have. For example, many local authorities admitted that they don’t specifically consult any blind or partially sighted groups, while others only provided information via inaccessible site notices, leaflets or websites.

RNIB is calling on local authorities to review their policies in relation to the six most common obstacles facing blind and partially sighted people, and to consult with people with sight loss to develop a ‘street charter’ that puts a clear highway policy at the heart of their local decision making.

Every 15 minutes, someone in the UK begins to lose their sight. We are the Royal National Institute of Blind People (RNIB) and we’re here for everyone affected by sight loss – that’s almost 2 million people in the UK. If you, or someone you know, has a sight problem, RNIB can help. Call the RNIB Helpline on 0303 123 9999 or visit www.rnib.org.uk