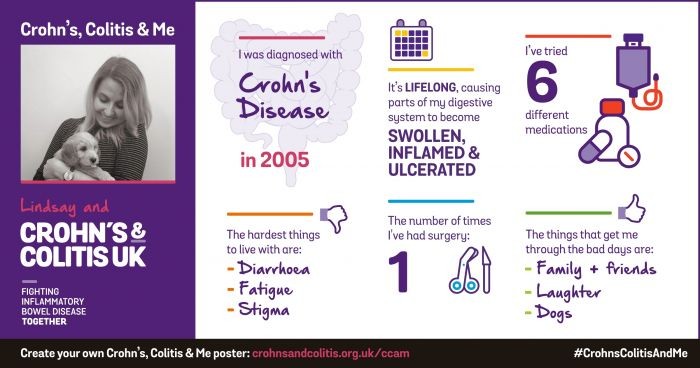 There are two things in life that I absolutely love talking about. One is dogs. Because – well, they’re dogs. And the other is my digestive system.

Not your typical dinner party conversation, granted. But I feel like I have to talk about my insides. Not because they’re particularly interesting (not to normal people anyway), but because digestive health is something that simply isn’t discussed. And it should be.

Stomachs and intestines and colons and rectums – it’s not very sexy. In fact, it’s a total taboo in British culture. No toilet talk round here, thanks! But for thousands of us, our intestinal bits and bobs are a huge part of our lives – and definitely worth shouting about.

When I was 18, I got rushed into hospital with crippling stomach pain. I couldn’t move. I couldn’t eat. All I wanted to do was sleep and hope it was all over when I woke up again. It never was. I had inflammation in my small intestine that was so severe that my bowel was almost blocked.

I’d been suffering with symptoms for years. Pain. Blood in my poo. Nausea. But I didn’t say anything because – well, who wants to go to their doctor in their teens and declare they might have a problem with their bowel? It’s embarrassing.

And that’s the case for so many people. I have Crohn’s disease, it turns out. An inflammatory bowel condition which is characterised by chronic diarrhoea, pain, blood in your stools, fatigue, loss of appetite, weight loss… It’s a bit of a horror. It’s a lifelong condition and, while it can be managed, there’s no cure. I ended up having to get about 14 inches of intestine removed, and after that, I was pretty well managed with medication.

And lots of people, like me, put off getting support because they’re embarrassed by it all.

Today marks the start of Crohn’s and Colitis Awareness Week, seven days dedicated to shouting about bowel problems – and I really think we ought to be doing more of that. 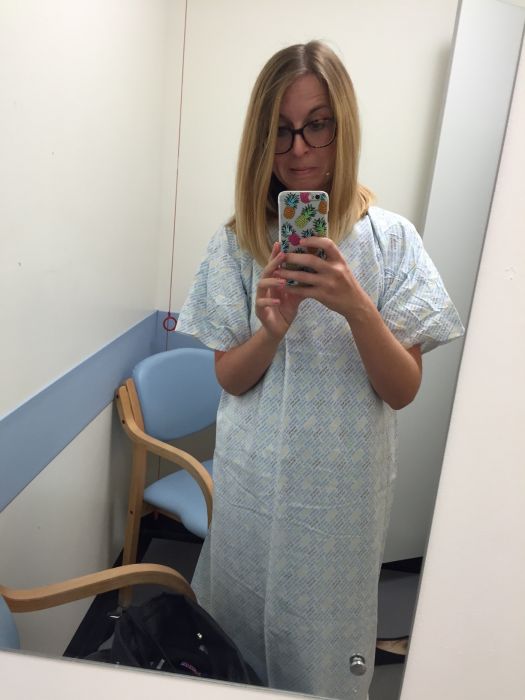 In hospital after a small bowel MRI

Because bowels aren’t nice. No one wants to talk about poo (apart from me apparently). But because of that, lots of people are suffering, often going undiagnosed, and these are very serious conditions.

Inflammatory bowel disease (that’s the name given to Crohn’s and its sister medical problem ulcerative colitis) affect 300,000 people across the UK. That’s a lot. But we’re often scared to talk about it, and as a result, IBD doesn’t get the recognition or support that it often deserves.

And it does deserve it. Living with IBD can be horrendous. I was really lucky in that I had a good nine years where I was symptom-free, following my diagnosis.

Right now, however, I’m in a pretty horrible situation. For almost two years now, I’ve been having Crohn’s symptoms – and nobody can get to the bottom (arf) of it all. I’ve had test after test, and none of it adds up. My inflammatory levels are through the roof, I’ve got near-constant diarrhoea (we’re talking about 15 toilet trips a day), I’m losing weight rapidly, I can hardly eat, my hair is falling out, I haven’t had a full night’s sleep in months, I’m constantly worried, my muscles ache all over my body, and I can’t really leave the house. I’ve been in and out of hospital several times over the last year with dehydration – I’m in the loo so often that my body can’t keep up. 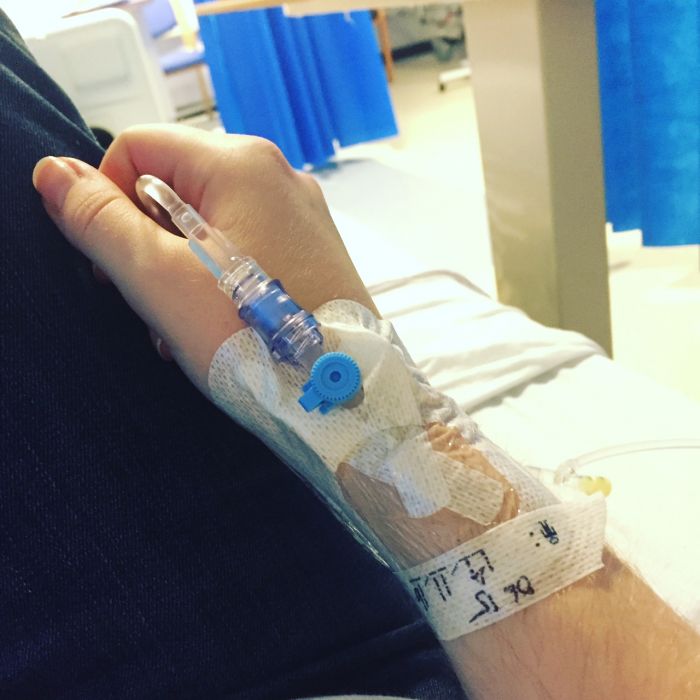 On fluids – a fairly familiar sight for me these days

Right now, I’m living at my parents’ because I can’t cope on my own, and I’m working from home because the idea of commuting into the office every day is just impossible. Yesterday, I interviewed a Spice Girl in my pyjamas while willing my bowel to behave itself. It was a career high.

Despite all of this, when the doctors have had a look inside me lately, everything appears to be normal. With my symptoms and my test results, I should have obvious inflammation. But it’s just not there. Colonoscopies, endoscopies, a small bowel MRI and even a pill camera (yes, really) have all said everything looks OK.

I was put on an expensive biologic medication called Humira about three months ago which aims to fight inflammation. It has a 60% success rate in Crohn’s patients. It turns out I’m part of the 40% it doesn’t work for. I’m, effectively, back at square one. No one can explain why I’m feeling the way I am. And no one can treat what’s wrong with me. It’s a vicious circle.

I’ve been taken off all of my meds for now and I’m scheduled to go for a colonoscopy and endoscopy in the next couple of weeks to try get a better picture of what’s going on inside of me when I’m drug-free. My case is being discussed with experts across the country. They’re now talking about the possibility of a problem in addition to my Crohn’s – but they’re not quite sure what. I’m a real mystery. My consultant, who is fantastic at what he does and has over 20 years’ worth of experience, doesn’t have a clue what to do with me. He’s never seen anything like it.

I am struggling. Big time. Physically, mentally – the lot. Because it’s not just a physical illness. IBD has a huge psychological impact too. Many patients end up dealing with depression and anxiety on top of their physical symptoms. My life is dictated by my bowel. That’s not really where I saw myself at 29. And I really wish more was being done for people in my position. 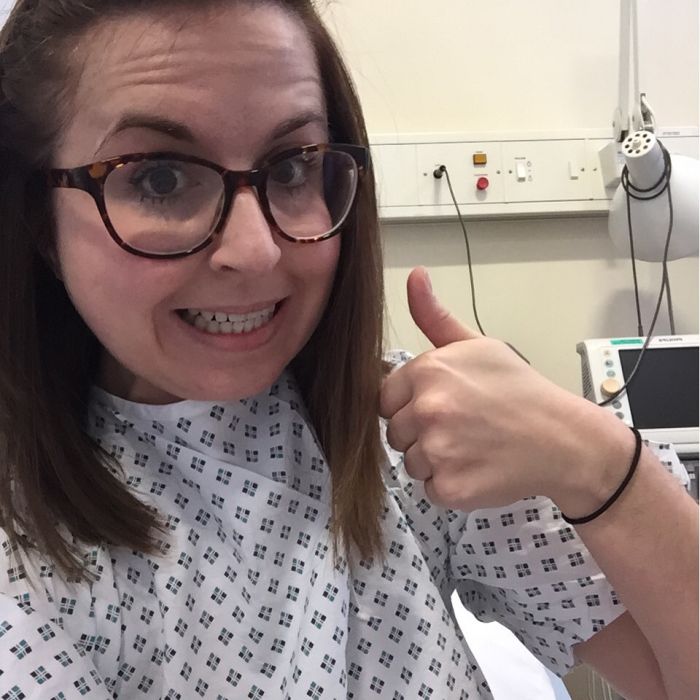 Looking surprisingly cheerful after one procedure

I know that I’m by no means the worst off. There are folk out there who are suffering much, much more than me. But we need awareness. We need funding for research and treatments. We need to know what causes this. How to cure it. It might just be a bit of tummy trouble to you (if I had a pound for every time someone tells me about the terrible stomach bug they once had or their aunt with IBS, I’d be rich), but when your whole life is ruled by when your next unexpected toilet visit will be – it’s a nightmare. My bothersome bowel affects everything. And I wish it didn’t have to.

Which is why I think more of us should speak up. If you’ve got dodgy guts, talk about it. Let other people know that, actually, that isn’t normal – go get it checked out. Talk to friends and colleagues about it. Try raise some money for charities like Crohn’s and Colitis UK, who do fantastic work in research and support for patients and their families. Because IBD? It’s more than just a poo disease. It affects everything. And we need help.

What not to say to someone with an invisible illness