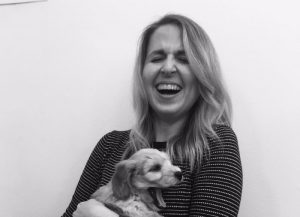 Enable editor Lindsay Cochrane was diagnosed with Crohn’s disease when she was 18 years old – and the illness has had a profound impact on her life. Here, she shares why

This morning, I practically bounced out of bed and dashed towards my Lindt advent calendar, feverishly prising open door number one and popping my little golden reindeer in my mouth before my eyes had even adjusted to the fact that it was morning.

No, I’m not six years old (try five times that). And I’m not a chocoholic either. I was, instead. enjoying a very simple pleasure that I’ve not been able to indulge in the last couple of years.

And it seems rather fitting that I was able to do this on Purple Friday, also known as the start of Crohn’s and Colitis Awareness Week.

I’ve written about my Crohn’s experience once or twice on here. The last couple of years have been, in a word, horrific. This time last year, rather than getting torn into my advent calendar, I was lying in bed at my parents’ house, gearing up for my fifth hospital admission of the year. The year before, I looked forlornly at the calendar that remained unopened, knowing all too well the impact the contents would have on my insides.

In September 2014, the disease that had remained dormant for almost ten years decided the time had come to make an reappearance.

Crohn’s is an inflammatory bowel disease – ulcerative colitis is the other common one you might have heard of. The two affect 300,000 people in the UK – in our office alone, two of us have an IBD, and several members of the team have loved ones who are affected. It’s pretty common. Yet, no one really talks about. Why? Well, it’s not very sexy. As the name suggests, inflammatory bowel disease is all about inflammation in your digestive system – the large intestine for ulcerative colitis, and anywhere in the digestive tract for Crohn’s patients. Symptoms include pain, diarrhoea, vomiting, blood in your stools, constipation, fatigue… Nothing you’d really want to discuss over the dinner table. It’s pretty unpleasant to even think about, never mind live with.

It can be treated with medication, controlled with diet, and some people end up needing surgery to remove the diseased bits and either resection or leave the patient with a colostomy or ileostomy.

When an IBD is active, it’s all-consuming. You’re constantly worried about when you’re next going to need to go to the loo – last year, I was dashing off about 30 times a day at my lowest. You’re so tired. Not just ‘I could go a nap’ tired, but properly, ‘I can’t move’ tired, which no amount of napping can fix. You’re cancelling plans, you’re staying hidden away at home, you’re hoping and hoping that something will cure you and then utterly miserable when things don’t change.

The hardest thing for me was that I couldn’t eat – anything that I ingested was straight out the other end within minutes. And I love food. For ages, I was eating so little that my BMI dropped to the point where I was classed as underweight and I was prescribed high-calorie protein shakes. I ended up altering my diet for a bit to avoid things that irritated my insides – so all dairy was out, gluten was minimised and I couldn’t. Eat. Chocolate. I hated it. I lost so much weight, I had zero energy and I was miserable as well as being in near-constant pain.

For almost three years, I had test after test, and there wasn’t really much to write home about.  Usually, if your Crohn’s is active and the doctors do a colonoscopy or endoscopy, they’ll see the inflammation, clear as day. Not for me. So after about three scopes, a capsule endoscopy, small bowel MRI and so many blood tests I was starting to feel like a pin cushion, they came to the conclusion – I had low-grade but wide-spread inflammation throughout my digestive system. My doctor had never seen anything like it before.

And so the treatment options started. I’ve taken a lot of pills (including more rounds of steroids than is probably wise), I’ve had to inject myself in the stomach once a week, I mix a delightful, gritty powder into my orange juice in the morning to try slow down my insides – nothing was really working.

Then September came. And – sorry to be dramatic, but – my life changed.

I got approved for funding for a drug called vedolizumab, which is fairly new and works slightly differently to other treatments, in that it targets white cells in your gut. And guys? I think it’s working.

And it’s really started to make me appreciate the little things. Being able to have a coffee with regular milk and not soya. Being able to have a coffee, full stop. Chocolate. Not having to carry a spare pair of pants in my handbag (sorry, but as any IBDer will tell you – you never know). Waking up and it’s actually time for me to wake up – not 1am and my stomach’s growling and I have to dash to the loo. Eating out! Going to the cinema and seeing the whole film – not having to run to the toilet at the crucial part. I don’t have to locate the nearest lavatory when I arrive in a new location. I can make it through the day without the maximum dose of painkillers. Even walking to our office from the train station without feeling like I need a nap is a thing of wonder.

Yes, I still have my off days. But compared to this time last year? I feel like a new woman. And it’s made me realise how lucky I am.

Sure, three years of pooing like it’s going out of style and ending up in hospital, dehydrated, isn’t ideal. But I feel like I’m coming out the other side now. Not everyone is so lucky. Not everyone responds to treatment – so while vedolizumab is looking really promising for me, it really is luck of the draw with a lot of the drugs that they prescribe. There’s not a cure for Crohn’s or colitis, which is the scary thing we all have to live with. Flare ups can come out of nowhere, and you know that there’s nothing that’ll stop that from happening.

Which is why research is so, so important. It’s what helps drugs like the one I’m on now come to fruition. Charities like Crohn’s and Colitis UK raise funds to help people like me, and to put money into research that’ll hopefully one day find a cure and more effective treatments.

To do this, they need your support. So head to the CCUK site here, and donate what you can. Even if it’s £1, every little helps.

Bowel disease isn’t pretty. It’s not as high profile as some conditions. It’s pretty disgusting to talk about, if I’m honest. It’s horrible. It’s restrictive and isolating and so, so hard to deal with – physically and emotionally. And me and the 299,999 or so other people with IBD in the UK need your help.

So go on. Get involved with the awareness week. Your support could help someone like me find the joy in the little things again. Thank you.

FIRST HAND: a Mencap campaign assistant shares their experience of getting the COVID-19 vaccine