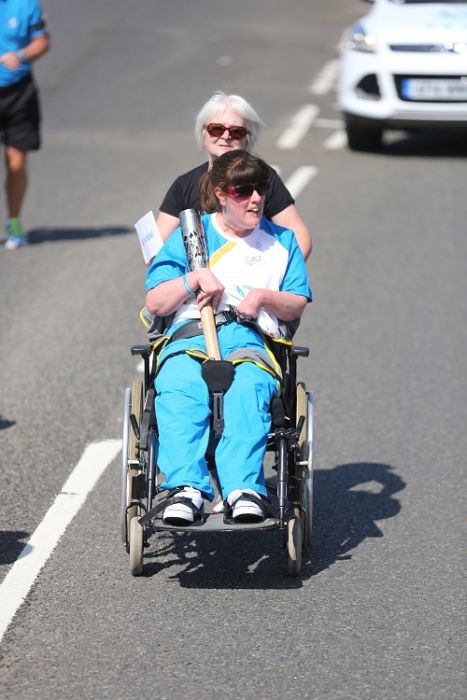 Govan-based Leanne Carmichael, 34, yesterday (Tuesday) had the honour of carrying the Queen’s Baton during its journey throughout Scotland, ahead of tonight’s Commonwealth Games opening Ceremony at Celtic Park.

Leanne, who has a learning disability and cerebral palsy, was chosen to carry the baton through her hometown of Govan, thanks to her continued dedication to raising thousands of pounds for local good causes. Leanne lives in her own tenancy at Elder Grove, a supported living service for adults with learning disabilities that is part of the national social care charity Community Integrated Care.

Her charitable efforts have seen her complete an annual charity 10k race for the last five years in honour of the Prince and Princess of Wales Hospice in Glasgow, as well as hold regular fundraising coffee mornings for Macmillan.

Gillian McConnell, Community Integrated Care’s Regional Manager for Glasgow, says: “Nobody is more deserving of this incredible honour than Leanne – her devotion to living a full life and giving back to her local community, despite the many challenges she faces in life, is incredible. Watching Leanne carry the baton on its final journey through Govan was a very fulfilling and emotional moment. She should be very proud that she will forever be part of the history of such an inspirational and important event.”

Community Integrated Care is one of Britain’s biggest care providers – supporting over 5000 people across England and Scotland who have learning disabilities, mental health concerns, autism and age-related needs – including dementia. Find out more at www.c-i-c.co.uk

Commonwealth Games are a pinnacle of inclusion for disabled people, but legacy will fail without more work, says Vitalise

Edinburgh man with autism takes on Silverstone Half Marathon