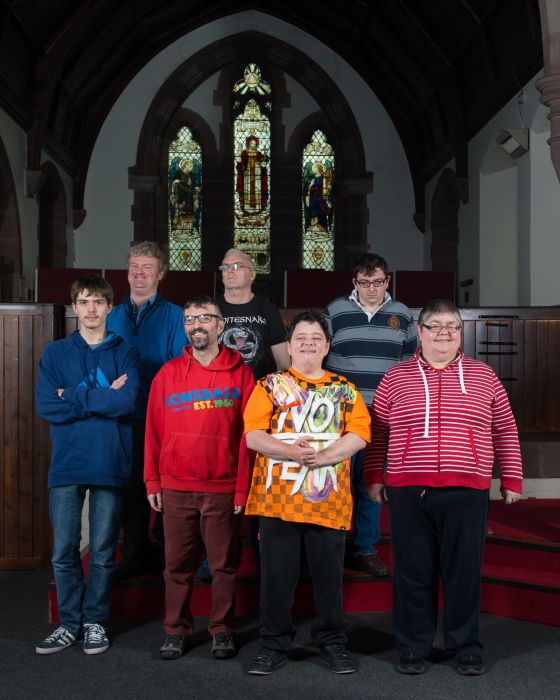 autism spectrum and are living in full time care.

Now, nearly twenty years after its formation, the band is releasing its

first ever single, a Christmas song called Warm Hearts and Wine which

is available on iTunes from 12 December. Also available will be two

further singles from the band, Growing Up in the Seventies and My Life.

The Beathovens have a long history of smashing expectations and breaking

stereotypes, writing their own songs and performing live with panache.

and have played with Jools Holland twice – at Cambridge University in

the bands contest. They’ve even played at Glastonbury.

Bromborough, Wirral, under the guidance of performing arts specialists

from charity Autism Together, which supports around 500 people on the

autism spectrum across the North West.  In 2015 Autism Together won a

conversation about Christmas and the winter months. Once the lyrics were

allowing anyone with an autistic spectrum condition to communicate and

interact through the shared experience of music. As bass player and

difficult to communicate with anyone. When we are on stage we

communicate with everyone. Music lets me be who I want to be. Having

autism makes you not be able to do some things, but in The Beathovens we

are saying we are here, this is who we are.”

Autism Together Activity Manager Dean Ravera, who manages the band,

said, “Getting iTunes distribution is a huge step forward for us. This

created their own, unique, art form – and it’s genuinely carrying a

message about what’s achievable by people with autism.”

The singles can be purchased on iTunes for 99p each or £2.97 for all

three tracks from 12 December. A limited edition CD can be purchased for

SUPPORT TO FAMILIES OF PEOPLE WITH SPINAL CORD INJURY