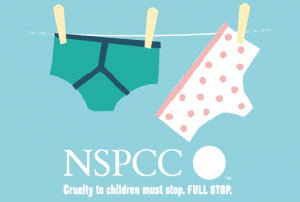 A new version of the NSPCC’s successful campaign the Underwear Rule is being launched today to help parents teach children with a learning disability about sexual abuse.

The NSPCC and Mencap have joined forces this Child Safety Week to make the popular guide accessible for both parents and children with a learning disability.

With more people than ever before contacting the NSPCC helpline (0808 800 5000) about sexual abuse and research indicating that disabled children are three times more vulnerable – both the NSPCC and Mencap are encouraging parents to talk ‘PANTS’ with their children to help keep them safe.

‘PANTS’, is an easy way for parents to start conversations with their children about the Underwear Rule, which has now been re-written and designed in easy-read to make it more accessible.

Privates are private
Always remember your body belongs to you
No means no
Talk about secrets that upset you
Speak up, someone can help

Nearly 40 percent of parents with children aged 5-11 now recognise the Underwear Rule campaign and encouragingly 63 percent of these parents have spoken to their children about keeping safe from abuse.

The guide is also helping the police catch perpetrators – earlier this year Ron Wood, 60, of Chaddesden, was jailed for eight years after being found guilty of four counts of sexually assaulting a three year-old girl. The girl’s mother reported Wood to the police after she taught her daughter the Underwear Rule and the young girl told her about the abuse.

“It’s vital we ensure all children – especially those who may be more vulnerable to sexual abuse learn how to recognise right from wrong behaviour.

“This is why we are launching an Underwear Rule guide for parents and children with a learning disability. We need to make sure all children know the areas of their bodies that are private, that their body belongs to them and where they can seek help if they need to.

“The campaign is already proving successful – 400,000 more parents have now had conversations with their children about keeping safe from abuse and it is even helping to catch sex offenders. However we know there are still vulnerable children out there and with more people than ever before contacting us about sexual abuse we need to do everything we can to protect them.”

“We know that children with a learning disability are often more vulnerable than other children for lots of different reasons.

“When it comes to sexual abuse, it is fundamental that children with a learning disability are taught about appropriate behaviour and that they have the tools to communicate their experiences to their parents.

The Underwear Rule has already been viewed online over 600,000 times and downloaded over 100,000 times. To download a guide yourself or for more information please visit: www.nspcc.org.uk/underwear