Every day in the UK, nine women are diagnosed with cervical cancer and nearly three die of the disease. Cervical cancer is largely preventable thanks to the NHS screening programme and HPV vaccination programme. Across England 77.8 per cent of women attend screening, yet for women with learning disabilities, studies have shown that nationally, uptake drops significantly to between 13 to 25 per cent. To mark the start of Cervical Screening Awareness Week (15-21 June) Jo’s Cervical Cancer Trust aims to raise awareness of this inequality and has produced two resources to help women with learning disabilities to make informed choices about their health.

In addition to the EasyRead guide women can also access ‘The Smear Test Film’ a health education film resource for women eligible for cervical screening who have mild and moderate learning disabilities. Made by Public Health England in association with Jo’s Cervical Cancer Trust and launched in January 2015. 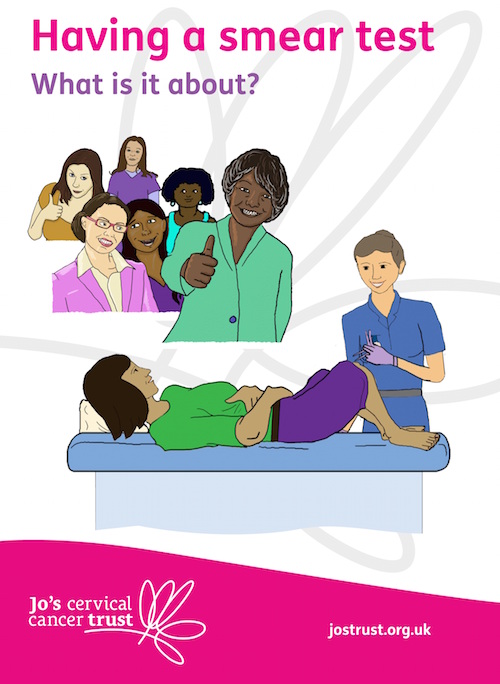 ‘The Smear Test Film’ has been made in conjunction with women who have learning disabilities who helped both script, illustrate and star in the film. It aims to help women make an informed decision about whether to take up their cervical screening invitation as well as equip carers with relevant information on cervical screening and its role in preventing cervical cancer.

The film can be ordered from Jo’s Cervical Cancer Trust by visiting their website and it can also be viewed on their YouTube channel.

Robert Music, Chief Executive of Jo’s Cervical Cancer Trust, commented: “Cervical screening is a potentially life saving test so it is vital that everyone is able to access the programme regardless of their background. We hope that with these resources we are able to reach this group of women, improve their understanding of cervical screening and encourage them to attend when invited.

“We’re calling on health care professionals and carers that work with women with learning disabilities to use the resources to better inform women about their rights and make a choice whether to attend their test.”

Professor Julietta Patnick, Director of the NHS Cancer Screening Programmes, managed by Public Health England, said: “We know that women with learning disabilities are much less likely to attend for cervical screening than the general population.

“There are many ways in which women with learning disabilities can be helped to make an informed choice about attending for their cervical screening test.

“I hope that by watching the Smear Test film and using the EasyRead, many more women with learning disabilities will understand what the test is, what is involved and why it is so important to have regular cervical screening in the prevention of cervical cancer.”

Jo’s Cervical Cancer Trust is the UK’s only charity dedicated to supporting women and their families affected by cervical cancer and cervical abnormalities. The charity also campaigns to increase awareness of the disease and bring down numbers diagnosed through promoting the cervical screening and HPV vaccination programmes. The charity’s national helpline is on 0808 802 8000. Find out more at www.jostrust.org.uk