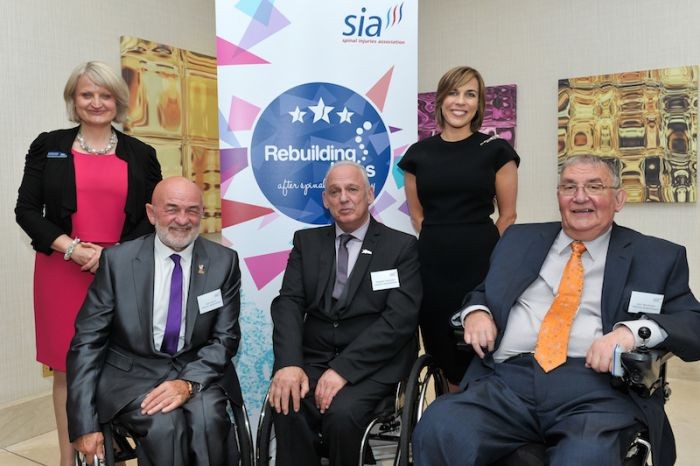 A variety of charity supporters headed to Birmingham to help celebrate the achievements of people in the spinal cord injured community at the Spinal Injuries Association’s Rebuilding Lives Awards.

The 2016 Rebuilding Lives Awards Ceremony took place on 9 June at the Hilton Birmingham Metropole and was hosted by 2012 GB Wheelchair Rugby Team Captain and SIA Ambassador Steve Brown. Steve has been a supporter of the charity since he became spinal cord injured in 2005, even working for them to help provide the vital peer support that he had received himself, leaving to further his wheelchair rugby career with Team GB.

Steve was assisted by a number of other Paralympians and supporters, which included SIA’s Vice President Claire Williams OBE, Josie Pearson MBE and Natasha Baker MBE, as he led the presentations of 18 awards to spinal cord injured people and the healthcare and law professionals that contribute to their treatment and care.

Winners during the evening included Kevan Baker OBE who was congratulated for his achievements in disability sports and for supporting other spinal cord injured people during their rehabilitation. Although not in attendance at the event, friends accepted two awards on his behalf, the Sports and Recreation Achievement Award and the award for the overall winner of the evening, the Stephen Bradshaw Award for Rebuilding Lives.

Kevan Baker OBE, from Wakefield, later commented about his awards:

“Unfortunately I was on holiday with my wife in Majorca for the Spinal Injuries Awards Ceremony, so imagine how proud I felt on Thursday morning when I received the news that had won not one, but two Rebuilding Lives Awards? I am very grateful to the charity for giving me the awards. Thank you very much and keep up the good work!”

Sue Browning, the Chief Executive Officer of the charity says,

“The Rebuilding Lives Awards is a fantastic opportunity to celebrate the achievements of people in the spinal cord injured community.

The winners, and everyone who was shortlisted for the 2016 Awards, are very deserving of the recognition that they received during the event, for their great commitment to improving the care and support to spinal cord injured people and their families.

We hope that the event goes some way in thanking Kevan and the rest of the winners and nominees, for the difference that they make.”

The Spinal Injuries Association introduced their first Awards Ceremony in 2013 and thanks to its success the event has been an annual fixture in the charity’s diary. The shortlisted nominees are chosen from nominations received from within the spinal cord injured community, and winners selected by an independent judging panel.

To view the full list of winners and photos from the event – please visit www.spinal.co.uk

Being a user led organisation, SIA are well placed to understand the everyday needs of living with an injury. SIA are here to meet those needs, by providing key services to share information and experience, and to campaign for change, ensuring each person can lead a full and active life. Find out more at www.spinal.co.uk.

People with learning disabilities put MPs on the spot

Million pound home for people with autism opens in Wirral