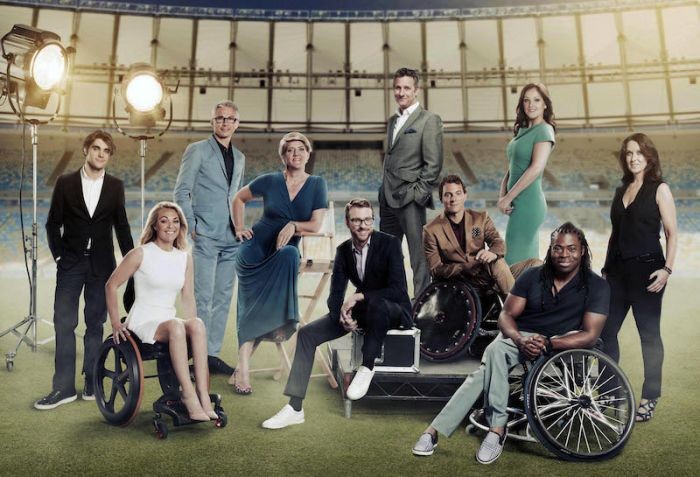 Channel 4 has revealed its Paralympic presenting team ahead of the Games kicking off in September.

The line up features the largest number of disabled presenters ever seen on television in the UK, heading up over 700 hours of live Games coverage across Channel 4 platforms on air and online.

With Channel 4 heralding 2016 as its Year of Disability, dedicated to increasing representation of disabled people both on and off-screen at the broadcaster, two thirds of the Paralympic presenting team will be disabled, including all four daytime presenters.

Topical comedy chat show The Last Leg, one of the real success stories of Channel 4’s 2012 Paralympic coverage, will return live from Rio every night of the Games, filmed in front of a live audience at the Olympic Park.

Clare Balding said: “It is a privilege to return to Channel 4 for the Paralympics and build on our Bafta award-winning  legacy of the 2012 Games, which helped shift Para sport from the margins to the mainstream – and transform perceptions of disability.”

Co-host RJ Mitte added: “I have nothing but admiration for these superhuman athletes who refuse to be confined by what nature has dictated. I cannot wait to witness them push themselves to the limit and be a part of Channel 4’s ground-breaking coverage.”

Channel 4’s commitment to diversity doesn’t stop with its presenting talent. More than 15% of the Sunset+Vine production team are disabled people, many of whom are brand new talent identified through training schemes. Twenty-four disabled people came through Channel 4’s groundbreaking Rio Production Trainee Scheme, and 20 of them will be working on the ground in Rio in roles such as production coordinators, researchers and technical assistants for various production companies and broadcasters. As well as this, six more experienced mid-level team members with disabilities will be working on Rio content in more senior roles.

The channel will broadcast more than 700 hours of content across all platforms, with a boost in online streaming for 2016. Content will include both opening and closing ceremonies, nearly 120 hours of live sport on TV, as well as The Last Leg from Rio and over 700 hours of online streaming. There will be a daily highlights package available on All4 too.

Coverage is promising to be more accessible than ever before too, with subtitles, live audio description and signing of the open and closing services on 4seven. Audio described and signed versions of The Last Leg will be available on 4seven shortly after broadcast too.

Channel 4’s Head of TV Events and Sport Ed Havard says: “The Rio Paralympics will be one of the most ambitious live broadcasts in Channel 4’s history. We’re not only delivering the most comprehensive and innovative coverage of the Games ever, but also bringing entertainment to the heart of the coverage by transporting the whole of The Last Leg production to Rio and broadcasting the show live from the Olympic Park. And we’ll be setting another record by bringing together the largest team of disabled on-screen and off-screen talent ever seen on UK television. It promises to be an epic celebration of what will hopefully be a huge haul of medals for our Paralympic stars.”

Find out more about Channel 4’s Paralympic content at paralympics.channel4.com

Tokyo 2020 Summer Paralympic Games: Getting confident with Will Bayley