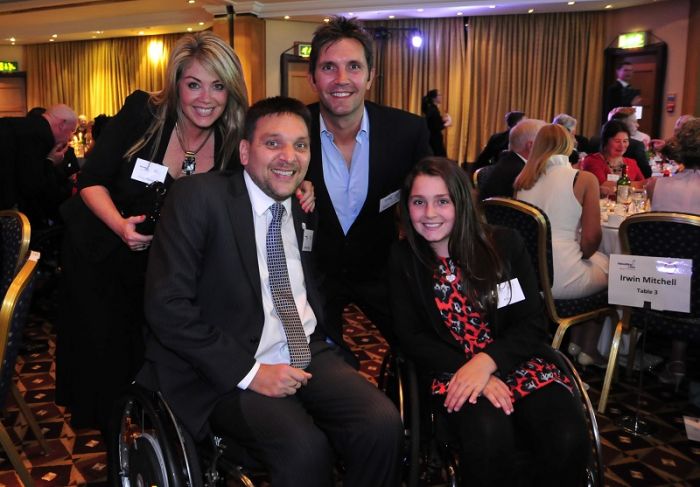 A variety of screen and sports stars flocked to Birmingham on 5 June to help celebrate the Spinal Injuries Association’s 40th Anniversary at their Rebuilding Lives after Spinal Cord Injury Awards ceremony.

The Rebuilding Lives after Spinal Cord Injury Awards ceremony was kindly hosted by Episodes and Green Wing actor Stephen Mangan. Stephen became involved in the event through the personal experience of his good friend Lucy Gannon, author of the BBC’s Best of Men and ITV’s Frankie.

Stephen was assisted during the evening by Lucy and other celebrity supporters of the Spinal Injuries Association including actors James and Oliver Phelps and Ben Owen Jones, presenters Gary Lineker and Lucy Alexander, and Paralympians Steve Brown and Josie Pearson. Each helped to  announce the winners of 16 awards.

Lucy, who presented the Outstanding Nurse Award, paid tribute to the event by announcing on stage “I only attend one awards ceremony each year, the only one that matters and that is the Spinal Injuries Association’s Awards.”

The Rebuilding Lives after Spinal Cord Injury Awards celebrate the achievements of the spinal cord injury community, and is SIA’s way of say ‘thank you’ to those that make an impact on the lives of others. This includes inspirational spinal cord injured individuals, healthcare professionals and law professionals.

Solicitor Matthew King OBE was the man of the night, being commended twice during the evening, as a positive role model for spinal cord injured people and for this charity work. During the first half of the event, Matthew was made his way to the stage for the first time as the joint winner of the Inspirational Achievement Award for Adults. Matthew was then speechless as he collected his second award as the overall winner of the evening, securing his Stephen Bradshaw Award for Rebuilding Lives from Stephen Mangan.

A full list of the Award winners is available at www.spinal.co.uk/page/rlsci-winners

About The Spinal Injuries Association (SIA)