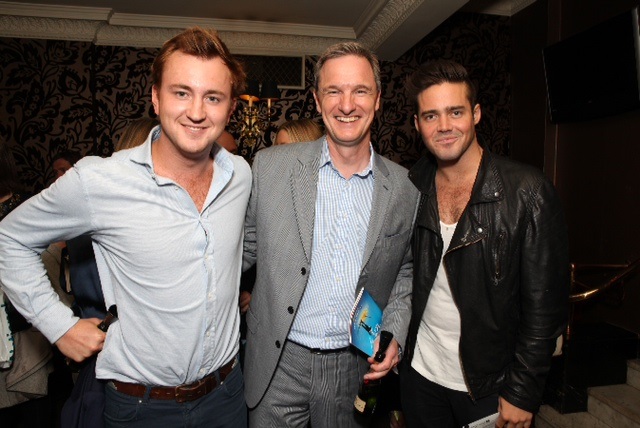 Produced by Luke Treadaway and director Katy Rudd, A Curious Night at the Theatre included the world premiere of Simon Stephens and Mark Haddon’s especially-written sequel to The Curious Incident of the Dog in the Night-Time.

The event at the London’s Apollo Theatre was hosted by comedian Mel Giedroyc and also included stand-up comedy from Simon Amstell. Music was provided by singer-songwriter and multi-instrumentalist Bat for Lashes, the all female vocal group The Boxettes, pianist Derek Paravicini who is blind, has autism and severe learning difficulties, and is renowned as one of the most extraordinary musical entertainers of his generation, and TheJames Christy Band. James Christy was diagnosed with Asperger Syndrome when he was six years old and ‘discovered’ at the age of 14 by his music teacher.

The evening was rounded off by a surprise acoustic performance by Coldplay’s Chris Martin playing Viva la Vida and Paradise live.

The live auction saw a champagne afternoon tea at The Ritz with Matt Smith be won by a £6,000 bid, and a one-off walk-on role in War Horse was auctioned for £2,200. Afternoon tea at Fortnum & Mason with Mel Giedroyc went for £1,000.

‘Thank you to everyone who bought a ticket, came and sang a song, played music, told a joke and walked on the moon (Jude!). I’m so happy we raised so much money for Ambitious about Autism and the National Autistic Society. To everyone who helped us put the show on – thank you.” “A Curious Night at the Theatre has been a truly fantastic event. It’s been amazing for so many talented actors and musicians to generously give up their time and raise a significant amount of money.

We must thank our Ambassador Luke Treadaway, Katy Rudd, Janice Heyes and everyone from The Curious Incident of the Dog in the Night-Time for creating this unique event to increase autism awareness. It’s incredible what we can achieve when we work together to improve the lives of young people with autism.”

‘We’re overwhelmed by the generous support of the fantastic actors, musicians and comedians who took part in the amazing and unique production of a Curious Night at the Theatre.

‘Luke Treadaway and Katy Rudd pulled together a stellar cast of entertainers who’ve raised vital funds for people living with autism and helped to raise awareness of the lifelong disability which touches so many lives in the UK. We’re proud and grateful to have been the recipients of their support and we will use the money to help people with autism lead the lives they choose. Thank you so much.’

Autism is a lifelong developmental disability which affects around 1 in 100 people in the UK. It is vital that people with autism have plans in place to support them through changes in their life because of the nature of their condition.  This includes leaving school, moving into further education and employment. Money raised by this event will help to develop services to ensure that young people with autism receive help to plan for their futures and appropriate support to lead the lives they choose and flourish.