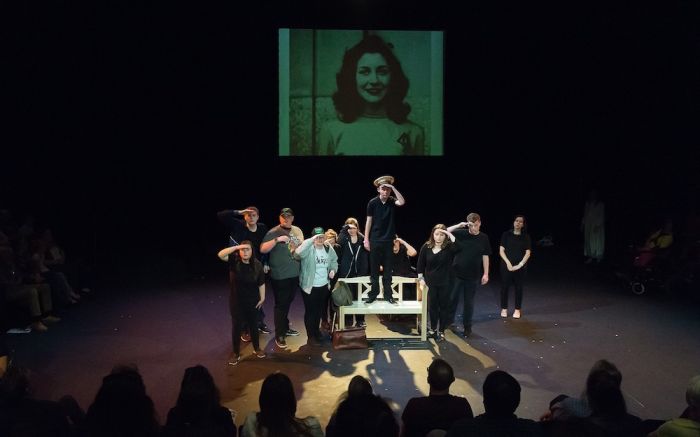 Young DaDaFest develops young disabled and Deaf artists, aged between 12 and 30 by providing them with a platform to perform in front of large audiences.

The annual event has grown significantly since its origins in 2003 and now includes both a performance focused event at the Liverpool Everyman and a music focused event at the Liverpool Philharmonic Hall’s new Music Room this week. The short festival now also recently included a number of fringe events, including Sandfest, an event created by students from Sandfield Park School.

The theme for this year’s Young DaDaFest is Outside the Box. Young performers will examine how people are put into categories which can make them feel judged, isolated and limited. How do we break outside of the box?

Throughout the entire process, young people are provided with the opportunity to develop their skills. The DaDaFest Young Leaders make all key decisions on the running of the events and chose this year’s acts following the initial call out. DaDaFest also provides mentoring and training opportunities for aspiring young performers.

This year, DaDaFest is also rolling out an all new project DaDaFest Rookies; which aims to increase employability for young disabled people within the creative sector. Young people can take advantage of development grants, producer placements within creative organisations and mentoring with professional artists.

Sam Wade, Arts Manager at DaDaFest said: “The young people we work with are dedicated to increasing the quality of the work they produce, creating high quality work with strong messages. They come up with fresh new ideas and have big ambitions for each Young DaDaFest, increasing what we offer each year.”

Ruth Gould, Artistic Director of DaDaFest said: “Once again the young people lead by talent passion and dedication to excellence. They make me proud and all should come and see and support them, they are the future.”

DaDaFest is a cutting-edge, innovative disability and d/Deaf arts organisation based in Liverpool. Working across the North West, as well as nationally and internationally, DaDaFest has been at the forefront of disability arts since the organisation began in 1984. To find out more about DaDaFest, visit www.dadafest.co.uk.

Disabled artists’ work to be showcased at Glasgow Tramway’s Festival