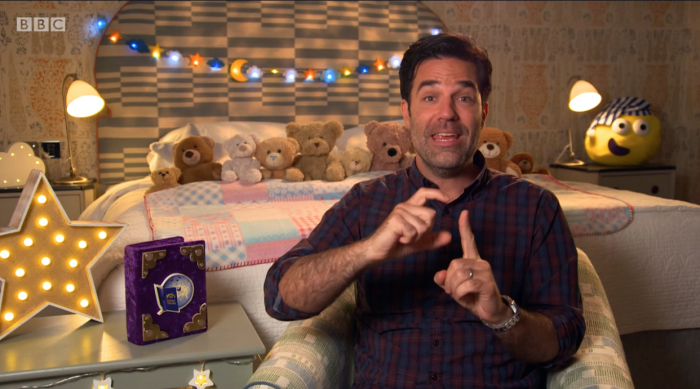 A form of sign language, Makton uses signs and symbols to help people who are unable to communicate efficiently. The signs used emulate those used in British Sign Language (BSL), however, unlike BSL, Makaton is always used alongside speaking.

"I am beyond honoured to be the first person to read & sign a CBeebies Bedtime Story using the Makaton language."

Discussing his appearance on CBeebies Bedtime Stories Rob said: “Our family learned Makaton to be able to communicate with our son Henry. We’re sad Henry isn’t here to see it but we’re happy other families will get to enjoy a story told in Makaton.”

One parent has now shared the joy and enthusiasm her son experienced whilst watching Makaton being used during the show. Laura McCartney shared a video of her six-year-old son, Tom watching CBeebies Bedtime Stories.

⁦@robdelaney⁩ ⁦@CBeebiesHQ⁩ thank you so much for the AMAZING bedtime story! My son Tom was so excited as you can see. He has never been interested in bedtime stories before… thank you for using his language 🤘🏻👌🏻👍🏻 Night night Rob, night night Henry 🙏🏼❤️ pic.twitter.com/Hik3Vfty5F

After being born with a heart defect, diagnosed with hearing loss at the age of two, and undergoing a tracheotomy in November of 2013, Tom uses Makton to communicate. Watching the episode with Laura, Tom’s excitement of seeing his language on TV is palpable.

With more than 100,000 children and adults using Makaton signs and symbols to communicate, the fact Rob used it during his bedtime story will have brought joy to many people across the UK.

Laura’s video has since gone viral and receiving praise from viewers. Rob has since viewed the video, too, and sweetly responded with: “So beautiful. What a wonderful family you are.”

The episode has been a complete success, and is still available to watch on BBC iPlayer.