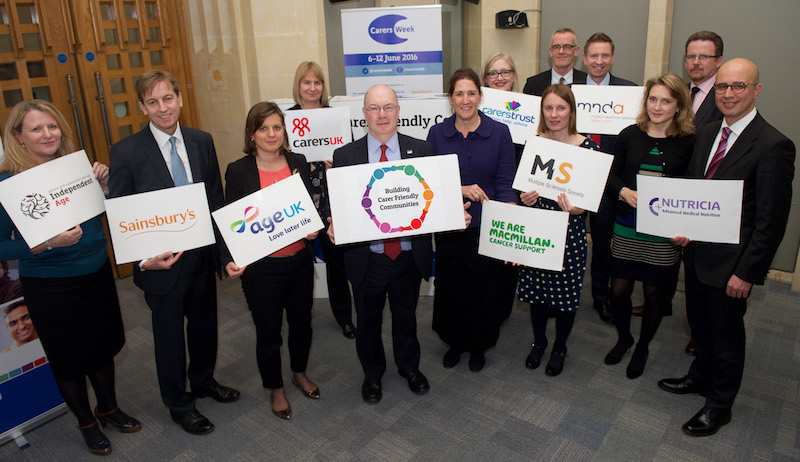 Alistair Burt MP, Minister of State for Social Care and Community, joined the Carers Week charities to call on individuals and organisations from across the UK to sign-up to the campaign and do what they can to support carers in their community.

6.5 million people in the UK currently care, unpaid, for a disabled, ill or older family member or friend. Research for Carers Week 2015 revealed that carers are experiencing huge variations in the level of support and recognition they get from their local community. As a result, this is putting their health and ability to look after the person they care for at serious risk2.

With this in mind, Carers Week 2016 will continue to focus on helping individuals, services and businesses to build Carer Friendly Communities – places where local people and services support carers to look after their loved ones well, while recognising that carers are individuals with needs of their own.

“Carers Week is a fantastic way to celebrate the vital contribution carers make to our families, communities and wider society. We know that caring for a loved one can be a rewarding experience, but without the right support at the right time, caring can also take a serious toll on a carer’s health, relationships and finances.

“By shedding light on what it means to be a carer, we hope that everyone will be inspired to do what they can to make life that little bit easier for carers. Whoever you are, whatever you do, you can make a difference. Building Carer Friendly Communities won’t happen overnight, but we can make them a reality – one brick at a time.”

There are lots of different ways to get involved in Carers Week:

Carers Week is an annual awareness campaign which takes place to celebrate and recognise the vital contribution made by the UK’s 6.5 million carers. It is also a time of intensive local activity with thousands of events planned for carers across the UK.

Carers Week is kindly supported by Sainsbury’s, Nutricia and the Lockwood Charitable Foundation.

Ex-serviceman supporting charity that helped him rebuild his life