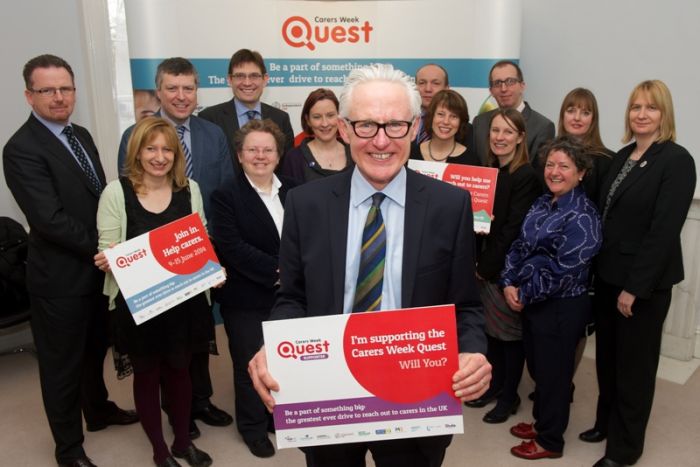 Campaign aims for greatest ever drive to reach UK’s carers

Carers Week Quest 2014 is calling on individuals and organisations across the UK to sign up to a groundbreaking initiative to reach carers in their local communities missing out on vital support and services.

The very nature of caring – of being there for a loved one facing ill health or disability – means too often people don’t at first, or sometimes ever, identify themselves as carers and, therefore, miss out on support.

Without the right help and support caring can have a devastating impact – carers can quickly become cut off with their physical and emotional health, work and finances all hit hard.

The Carers Week Quest will rely on the help of individuals and organisations – including community groups, GPs, health and social care professionals, employers – to connect with those who are caring.

The aim is to encourage improved collaborative working in local communities in order to reach the thousands of carers missing out on help.

Helen Clarke, Carers Week Manager said: “The Carers Week Quest is an important new initiative aiming to reach out to the thousands of carers in the UK missing out on support and services that can help them with their caring role. By working together during Carers Week with charities, businesses, community groups and public services, we have a huge opportunity to raise the profile of what caring is, who carers are, the impact it has on their lives and to help thousands of people who are missing out on help and support which could make a real difference to their lives”.

Norman Lamb MP, Minister of State for Care and Support, said: “More people than ever are taking on caring responsibilities for their loved ones.  Carers make an invaluable contribution to society and they need support to carry on the work they do.  That is why we are legislating to give carers new rights – for the first time, they will have a legal right to support of their eligible needs, putting them on the same legal footing as the people they care for.  I am pleased we are also able to support initiatives by the RCGP, carers and nursing organisations to raise awareness of carers among healthcare professionals.”

At the heart of Carers Week Quest activity will be a focus on working together in local communities during Carers Week, which takes place from Monday 9 to Sunday 15 June 2014.

The purpose of the Carers Week Quest is to:

To find out more visit www.carersweek.org

Carers Week 2014 runs from Monday 9 to Sunday 15 June. Carers Week is an annual UK-wide awareness campaign which takes place to celebrate and recognise the vital contribution made by the UK’s 6.5 million carers. It is also a time of intensive local activity with over 12,000 events planned for carers right across the UK. In 2013 more than 2,600 organisations registered to take part in the campaign. Carers Week is made possible by Carers UK joining forces with Age UK, Carers Trust, Independent Age, Macmillan Cancer Support, Marie Curie Cancer Care, MS Society, Parkinson’s UK, Skills for Care and the Stroke Association.