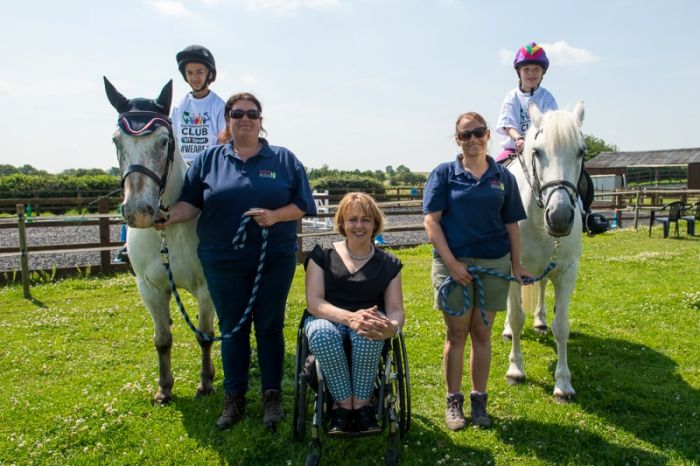 Yesterday, Baroness and gold medalist Paralympian Tanni Grey-Thompson visited charity Riding for the Disabled Association (RDA) at Kesteven Rideability, Hough on the Hill, Lincolnshire, to mark the one year anniversary of BT Sport’s charity, The Supporters Club, as part of its #WeAre1 campaign.  The Supporters Club, the broadcaster’s initiative which aims to build a better world through sport selected the RDA as among one of its first beneficiaries, awarding the charity a significant grant in 2013.

The RDA provides therapeutic support for disabled children and adults across the UK through horse riding and carriage driving. Money raised by The Supporters Club charity has enabled RDA to increase their capacity, supporting six local riding centres including Kesteven and as a result benefiting 502 young riders and workers.  At Kesteven Rideability, the backing has helped RDA introduce two new activities, Showjumping and Endurance.  Bradley, aged 11, has autism and has recently qualified for the RDA National Championships – something which couldn’t have happened otherwise! Skyla, aged 8 has Cerebral Palsy, and benefits from riding in the junior saddle club. In Kesteven, there is a lot of demand for younger children such as Becky, aged 7, with Downs Syndrome to join the Junior saddle club, but due to a lack of resources this has not yet been possible.  It is therefore with great excitement that this July, through the backing of The Supporters Club, Kesteven Rideability will be launching a new session dedicated to Tots of the Saddle Club (for riders aged under 7 years) and is looking to increase riding hours by 30 sessions over the year, amounting in an increase in participant numbers by 20%.

Baroness Tanni Grey-Thompson met with the remarkable children riders, observed their dressage, Showjumping and skills work, and also gave them the opportunity to ask her questions   Having also met with the dedicated RDA Volunteers who have inputted time and energy to help make the centre a success she said: “It’s absolutely fantastic to be here and see young disabled people getting on horses and riding, it gives them so much freedom and confidence, it’s incredible. Without initiatives like BT Sport’s The Supporters Club, they wouldn’t be able to do as much as they are doing. It’s that additional money that makes a huge difference because so many projects like this at a local level are run by volunteers who are just trying to find money, the right people and the right things to make a difference and at this level, it makes a huge impact on young disabled people’s lives.”

Sal Atkinson, Fundraising Manager for RDA UK said, “It was a pleasure to welcome Tanni and representatives of The Supporters Club to Kesteven; to witness firsthand the real difference that their support makes to our riders. With money from BT Supporters Club we are able to help RDA Groups like this across the UK to build capacity and enable even more young people to benefit from our activities.”

BT Sport’s ‘The Supporters Club’ are marking their one-year anniversary. Join via @supporters and visit www.thesupportersclub.org.uk

No such thing as empty space

Recognising achievement is the key to changing perceptions on disability