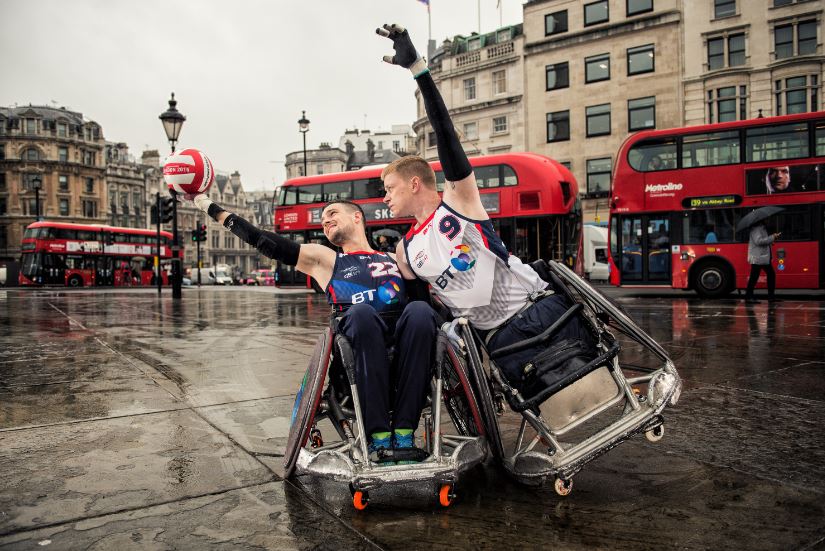 Great Britain Wheelchair Rugby has announced the 12 players who have been selected to compete in the BT World Wheelchair Rugby Challenge (12 to 16 October 2015) at the Copper Box Arena, Queen Elizabeth Olympic Park, London.

Kent’s Chris Ryan will Captain the squad, which also includes:

BT and GB Wheelchair Rugby today also launched a new film to inspire and excite the general public ahead of the event next week. Featuring some of the players who will be competing, including BT Ambassadors Jim Roberts and Ayaz Bhuta, the film showcases some of the intense action which the public can look forward to.

Performance Director for Great Britain Wheelchair Rugby, Lorraine Brown, said: “Our recent Gold medal win at the European Championships means we have qualified for the Paralympic Games in Rio, so this is a really exciting time for GBWR.   The BT World Wheelchair Rugby Challenge enables us to play the very best teams in the world and provides valuable preparation for Rio 2016’

David Pond, Chief Executive Great Britain Wheelchair Rugby comments, “It is really exciting to bring together the best wheelchair rugby athletes in the world to play in a tournament alongside the Rugby World Cup. We hope this tournament will be repeated in Tokyo alongside the 2019 Rugby World Cup. Congratulations to the GB athletes selected, they can look forward to a fantastic week playing the best in the world. Thank you to UK Sport, the Lottery, BT and all of our partners for making the event possible.”

Zaid Al-Qassab, Chief Brand Officer at BT said: “The Rugby World Cup has taken the nation by storm and we’re thrilled to give members of the public the chance to watch wheelchair rugby at its best. We are delighted to be playing our part in staging the BT World Wheelchair Rugby Challenge. This new, innovative event will see the BT GB team take on many of the best countries in the world and will provide a wonderful showcase for disability rugby. If you are in London and enjoying the Rugby World Cup, you might want to come down to the Copper Box next week and see the world’s best wheelchair rugby players in action.”

Earlier this year, BT announced a three-year partnership with GB Wheelchair Rugby (GBWR), by becoming its Official Principal Partner, as well as the Official Communications Partner. Through this partnership BT will work with GBWR to continue the transformation of the sport and drive levels of engagement. BT is also supporting several GBWR community programmes to increase participation in Wheelchair Rugby.

BT is a long-term supporter of disability sport in the UK and leading organisation in inclusion and diversity as well as the founding partner of the British Paralympic Association.

GB Wheelchair Rugby is a registered charity (No1130038) and the National Governing Body for Wheelchair Rugby in Great Britain. It receives funding from UK Sport and the Lottery to support its elite programme and the team for the Paralympic Games, and from Sport England to assist in providing sporting opportunities for disabled people. It is supported by the Rugby Football Union which provides for its head office at Rugby House, Twickenham. GB Wheelchair Rugby’s principal   partner is BT which supports the BT GB team and a number of community programmes. www.gbwr.org.uk