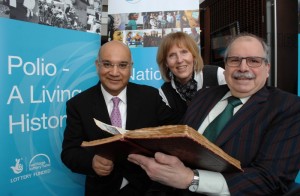 Despite inclement weather rendering much of the weekend’s sporting calendar ‘abandoned’, hundreds of British Polio Fellowship Members still managed to descend on Leicester, braving the unseasonably late snow storms to contribute to what has been described as ‘probably the best ever Indoor Games’.

British Polio Fellowship represents a community of some 120,000 people in the UK, living with the devastating effects of Polio and Post Polio Syndrome (PPS). While the Indoor Games have been held in Leicester for around 10 years and in Walsall for as many years prior to that, this year’s games had an extra special buzz. This was not just due to the effort required from everyone to get there, but also in no small part due to the support of Team GB Paralympian James Crisp and local MP Keith Vaz. James is a keen ambassador for the British Polio Fellowship, having contracted Polio as a result of vaccine damage. This led to James eventually losing the use of his left leg, and having experienced this muscle wastage from such an early age, James has always managed his lifestyle around his disability and hasn’t let it hold him back from achieving his dreams.

James attended the gala dinner on Saturday evening and personally presented all 27 medals to the bronze, silver and gold winners of nine different Indoor Games disciplines, including kurling; bowls; boccia; and darts. After all the formal medal presentations and photos, James made himself available to have more informal photos taken with competitors, proudly wearing his London 2012 silver medal.

Ted Hill MBE, CEO of British Polio Fellowship, said; “To have James play such an important part in our annual Indoor Games and give up so much of his own time speaks volumes about who he is as a person. His attendance at the dinner added a tangible wow factor and you could visibly see people’s spirits being lifted as he presented the medals and had his photo taken – not only with all the winners – but with anyone else who wanted a photo, as well. We can’t thank James enough for his support at the Indoor Games and we’re all rooting for him as he embarks on qualification for the World Championships in Montreal.”

Local MP for Leicester East, Keith Vaz, was also present, lending his support and helping launch the Indoor Games on the Friday morning. Keith Vaz MP, said: “Thankfully, new incidences of Polio are a thing of the past in the UK, but Leicester families with historical links to India and Pakistan in particular will know all too well that Polio still leaves a terrible blight on those nations. I applaud the efforts of The British Polio Fellowship in supporting the 120,000 people in the UK with PPS. I am especially pleased to see that The British Polio Fellowship is looking to engage with Leicester’s Asian community and share their experiences of how Polio affects their extended families. It’s an innovative approach and one which I’m sure will strike a chord with local families in Leicester who have experience of Polio from communities on the sub-continent.”  Whilst India was recently removed from the World Health Organisation list of countries having Polio, new cases of Polio are still being reported in Pakistan, Afghanistan and Nigeria. 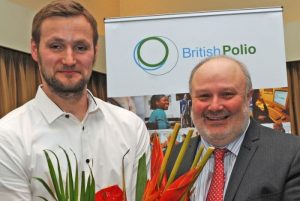 Around 140 competitors took part in the Indoor Games finals, having qualified from their regional heats in one of the 9 regions of the country, comprising East Midlands; Scotland; Home Counties; North of England; North West; South of England; Wales; Western; and Yorkshire.

10 individual games were be played: Kurling; Bowls; Darts (standing); Darts (sitting); Boccia; Draughts; Cribbage; Dominoes; 5s and 3s; and Scrabble, with medals up for grabs in all categories and competition extremely fierce.

Ted Hill added: “It must be remembered that many of our members who have made it through to the national finals were strong competitors in many sports when they were younger, many having represented their region and country in the original British Polio Games which included track and field and swimming. The National Indoor Games was born as a way of ensuring those living with the effects of Polio still had a national forum in which to compete and socialise.

“With the involvement and support of James Crisp, Keith Vaz MP and even our friends on regional television paying us a visit this year, it is difficult to see how the Games can be topped in 2014; but you can be sure we will be pulling out all the stops to try and ensure next year is even better.”

About The British Polio Fellowship

The British Polio Fellowship is a charity dedicated to helping, supporting and empowering those in the UK living with the effects of Polio and Post Polio Syndrome (PPS). It provides information, advocacy, welfare and support to enable its members to live full independent and integrated lives and works to develop worldwide alliances with other Polio and post Polio groups for the mutual benefit of its members.

Further information about the British Polio Fellowship and details on how to make a donation can be found at www.britishpolio.org.uk or by calling 0800 018 0586.

Canine Partners benefits to the tune of £500,000 from The Southern Co-operative