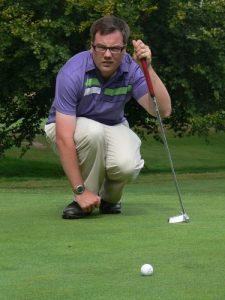 After promising junior golfer Graeme Mazur was brain injured and semi-paralysed in a road accident while on his newspaper delivery round he feared anything approaching normal life would be over.

But Graeme, now aged 29, never abandoned hope of putting aside his wheelchair, getting back on his feet and returning to the golf course. He is not only playing golf using only one arm but is organising a golf event which he expects will raise £5000  to cover his costs to join a group travelling to Namibia in November to help with a school development project. The trip is being organised by The Silverlining,  a charity which helps brain-injured individuals gain fulfilment through assisting others.

Following the event, Graeme is aiming at becoming a golf coach and starting a project to encourage others who are brain injured to take up the game.

“Some brain-injured people who have never played golf can get a lot of enjoyment and fulfilment from taking it up and seeing themselves making progress,” he said.

Graeme has a round of golf several times a week at Tenterden Golf Club in Tenterden, Kent, and practices in between. “It’s a very friendly club and many members helped me return to the game – they even raised enough money for me to have an electric golf trolley as my injuries left me much weaker.”

Richard Silman, Tenterden Golf Club’s golf professional, commented: “Graeme has worked hard and done exceptionally well to reinvent his game. He has a passion for golf and is always looking at how he can further improve his performance on the course.”

Golf professional and Kent Golf Development Officer Gary Bason, who has helped Graeme develop his approach to the game, said: “Graeme is very enthusiastic about his own golf as well as trying to help others. He continues to work hard on his game and despite his physical challenges is consistently making progress. He has assisted me at various disability coaching events and sessions over the last couple of years and is eager to learn and improve his coaching skills and experience.”

Graeme Mazur’s golf event will be held at The Oxfordshire, Milton Common, Oxfordshire, on Wednesday 23 July 2014. Participation will be through sponsorship and those taking part will include medical specialists and lawyers who have helped Graeme since his accident in 2000.

Further details about The Silverlining charity can be accessed at www.thesilverlining.org.uk