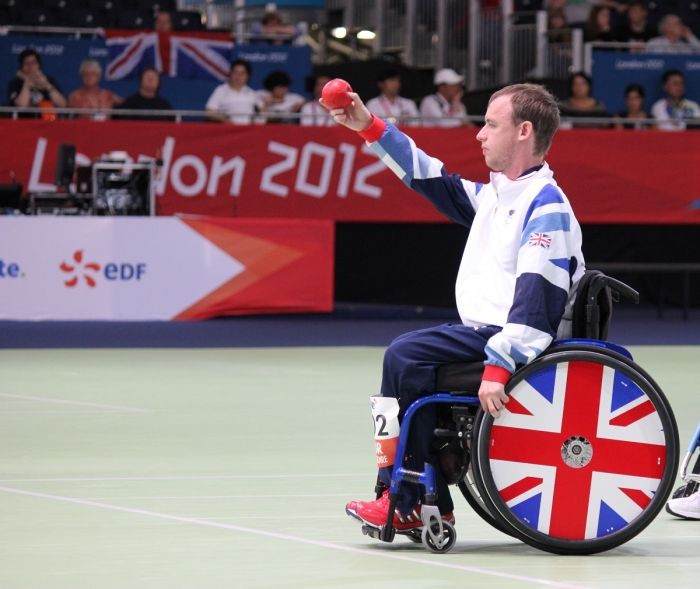 For years Stephen McGuire was able to play football, run and walk around.  But he had been living with an undiagnosed condition which had started to catch up with him. Stephen had the degenerative disease Muscular Dystrophy.

As time went on Stephen was slowly dropping behind his peers and no longer able to keep up when playing sports. His manoeuvrability suffered and by the age of 16 Stephen was a full-time wheelchair user.

“At the beginning I was trying to do everything I used to be able to do but then you just reach a stage where you realise you can do more with a wheelchair and that was when I stopped fighting it. Since then I found I had more freedom and ability. In fact, it was a relief getting into a wheelchair and it was also safer for me as I wasn’t falling anymore”.

Stephen’s passion has always laid in sport and in 2004 while watching the Boccia athletes compete at the Paralympic Games in Athens Stephen thought to himself, ‘I can do that’.

Stephen has now been playing Boccia for over 11 years and has been named the most successful British BC4 Boccia athlete. He is a seven-time Scottish Champion and a nine-time British Champion. Earlier this year Stephen was crowned World Champion in his category.

Boccia is a precision ball sport, similar to French boules. It is played by wheelchair users in various categories depending on their disability. It can be played by individuals, pairs, or teams of three. Because it isn’t an able-bodied game it is unique to the Paralympics as it doesn’t have a counterpart in the Olympics.

Stephen has now competed in two Paralympic Games, London and Rio. “My main focus for the last four years was getting to Rio. Being selected was a huge deal for me. 10 years ago I had the pleasure of playing on Copacabana beach so being able to go back was a great feeling.”

When he was in his NHS wheelchair without rising function, it made his life difficult as he wasn’t able to transfer easily meaning he would need help from others. He has also had reconstructive surgery on his hip and suffers from severe pain at times. He was in need of a more supportive chair. He started to see what his options were and the Muscular Dystrophy Campaign helped to fund it.

“Albion, my wheelchair dealer was just fantastic. They let my try different chairs until I found the one for me. They were very informative and fast at responding to any queries I had,” said Stephen.

Since his upgrade to an Ottobock B600 Stephen has been able to adjust his position to relieve his pain. He also has a cushion which he finds a big help. Stephen said, “I have more freedom because of the riser function and because it tilts I no longer need assistance when transferring. The B600 is perfect for me”.

The B600 is a high-quality, compact indoor and outdoor power wheelchair. Even with all optional add-ons, the B600 remains very compact and transportable.

The telescopic frame and associated ability to adjust the centre of gravity ensure individual, optimum stability. Thanks to the numerous special controls supported by the enAble®50 130 A control unit, a high level of autonomy and independence is possible.

Stephen has learnt that you need to look around at what’s available and advises, “Don’t think what is given to you is the only or best option for you. Contact your local dealers and don’t take the first word as gospel. I didn’t know what was out there until I looked and I found Ottobock had some really innovative products like the B600 which could help improve my quality of life.”

For more information about Ottobock’s range of products and services visit: www.ottobock.co.uk.