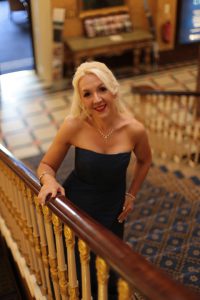 Elizabeth Capener, 33, a blind soprano from London has released her first opera album and will be donating a portion of the proceeds to the Royal National Institute of Blind People (RNIB).

The CD is a collection of classical songs and operatic arias and is a way for Elizabeth to say thank you to RNIB for the support it has given her over the years. It was produced thanks to a successful crowdfunding campaign, during which people offered their time and help for free, and recorded in just two days.

Elizabeth, who was first diagnosed with an eye condition called Retinitis Pigmentosa at age 17 said: ” There have been two constants in my life over the last couple of years; my passion for music and singing and RNIB.

“It was a devastating blow to lose my sight but RNIB has been there to support me and for that, I will always be grateful. I wanted to give something back to this wonderful charity and this is my way of saying thank you.”

The album, ‘Viva to the Diva’ is now available for £7.99 and you can find it on iTunes or at www.elizabethcapener.com.

Elizabeth will be donating a portion of the proceeds to RNIB.

Every 15 minutes, someone in the UK begins to lose their sight. We are the Royal National Institute of Blind People (RNIB) and we’re here for everyone affected by sight loss – that’s almost 2 million people in the UK. If you, or someone you know, has a sight problem, RNIB can help. Call the RNIB Helpline on 0303 123 9999 or visit www.rnib.org.uk

Two thirds of carers will not get a break this Christmas, survey reveals

Motivation launches “When I Grow Up” appeal