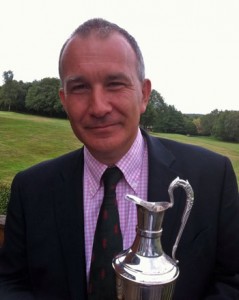 A blind golf champion has just become captain of his club, Royal Ashdown Forest in Sussex.

John Eakin, who was the 2011 British Blind Open champion and who plays off a handicap of eight, commented: “It’s nice to show that being visually impaired doesn’t stop you being a full member of a golf club.”

He added: “I’m looking forward to it. I was nervous, but I’m lucky because my brother was captain a few years ago and Royal Ashdown is a very friendly and supportive club. If I didn’t do this I would regret it for the rest of my golfing life.”

David Holmes, the Secretary of Royal Ashdown Forest, commented: “We read lots of stories about the negative side of golf so it’s good to show how clubs can promote inclusivity and that a disability doesn’t stop you from achieving your goals. John is a very popular member of the club and the past captains would have thought he was the best man for the job.”

John lost his sight eight years ago from a hereditary condition and is now visually impaired and registered blind. He has continued playing golf, reporting: “I can see a white ball in front of me and friends tell me where the flag is. I haven’t a clue where the ball has gone – although I can hear it in the trees! Then it pops up again when I’m about 20 yards away from it.”

In competitions he has a caddy and in blind and visually impaired events he is accompanied by his guide, Christopher Vaughan, a member of Royal Wimbledon. “Blind golf is very much a team thing and I could not do it without him,” said John.  His handicap was five before he lost his sight, when it went up to 12 before steadily coming down and he’s targeting a seven handicap.

John is involved with England and Wales Blind Golf, both as a trustee and as an international player and he is keen to promote disability golf. Last year he also co-captained the Rest of the World blind golf side which narrowly defeated North America at a biannual match in Atlanta.

Neil Baxter, the chairman of England and Wales Blind Golf, said: “Apart from being a very good golfer, John is a hardworking member of our Board of Trustees and is our handicap secretary and he thoroughly deserves this prestigious appointment. It is very pleasing to hear of a visually impaired golfer being honoured in this way.”

Jamie Blair, the England Golf Disability Officer, added: “England Golf would like to congratulate John on his appointment as captain at Royal Ashdown Forest Golf Club. John is a great advocate for the game and I am sure his club will benefit from his enthusiasm throughout his appointment.

“England Golf are committed to working with the board of England and Wales Blind Golf to introduce more blind and partially sighted people to the enjoyment of the game of golf. I hope to see more disabled people following John’s lead in the future and take an active role in their golf clubs, and not just as players.”

John’s appointment follows that of Peter Baker who became captain of Ellesmere Port Golf Club in Cheshire last month. Peter was born deaf and is thought to be the first pre lingual deaf person to hold the office – someone who was either born deaf or became deaf before learning to speak.

England Golf is the governing body for amateur golf in England. England Golf was formed on 1st January 2012 following the merger of the English Golf Union Ltd. and the English Women’s Golf Association and is one of the largest sports governing bodies in England looking after the interests of more than 1,900 golf clubs and over 713,000 men and women club members. www.englandgolf.org