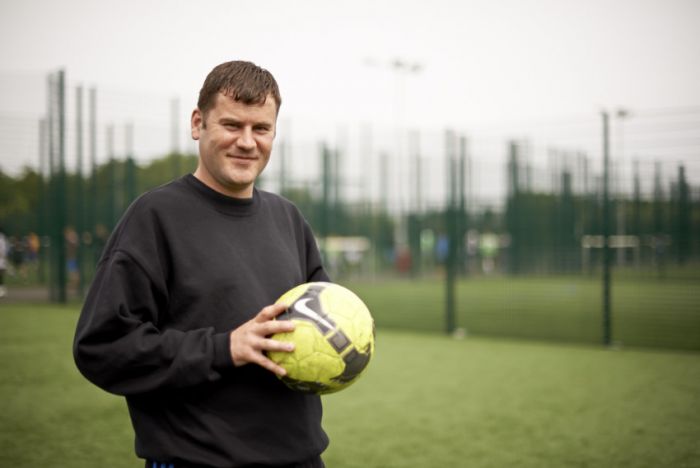 Craig Riach overcame sight loss to become the first visually impaired person in the UK to receive level 2 Coaching Disabled Footballers qualification with the IFA. There are currently no visually impaired coaches working within the FA for disabled football. A few years ago Craig had nothing, now he has his confidence back and it’s all because of the power of Football.

Craig is 35 and lost his sight when he was around 19 years old due to a hereditary condition called Lebers. He is registered sight impaired and only has a small amount of vision. Before he got involved with Henshaws Society for Blind People he was really isolated, but after getting involved in their football training program, thanks to Sport England funding, Henshaws was able to put him forward to do his coaching qualification and give him hope for the future.

He is now a volunteer for Henshaws and delivers the football fitness sessions on Mondays. He also volunteers for the Newcastle United Foundation where he helps to deliver children’s football on Wednesday nights. Craig talked to us about how taking part in the football training has changed his life.

“I’ve always played football, before I lost my sight I played for my school, for my county and on a pub team. I stopped playing when I lost my sight 13 years ago. I am able to watch matches as long as they are on a big screen, but I never thought I would play again.”

“I realised that I really enjoyed helping others and so I began to work towards coaching qualifications. I’ve now done my coaching, FA coaching, disability level 1 and level qualifications and I’m currently doing a youth module I help out with the youth team now. I also was recently sent over to Ireland to complete my level 2 IFA training, which was a great experience; ex-players Teddy Sherringham and Tom Huddleston were there too. I’m happy to say that I will be starting an Open University course in October in Sports Coaching and Fitness.”

“Taking part in the football training at Henshaws has massively helped me to get my confidence back again. I am doing things I didn’t think possible, I didn’t think I would ever go to university, but this has been a stepping stone for me and it’s all thanks to the power of Football.”

“I now feel like I have lots of opportunities to gain paid employment and make a career for myself.  A few years ago I had nothing, I was just sitting in the house and I didn’t think I would work again.”

Henshaws received Sport England funding, which alongside support from the Newcastle United Foundation, the Walker Dome, the Newcastle Fund and Children In Need, enables them to run Football related activities in the North East of England.

Philippa Taylor, Henshaws Service Manager is really proud of what Craig has achieved;

“We are the only charity in the North East to offer this kind of activity, and one of the only charities in the country who runs a Blind Football Coaching Programme. These lads have grown in confidence massively just from taking part in the football sessions. Football has done more in a month for them than I could have done working one to one with them for 12 months. It has improved not only their confidence, but their social and communication skills, improved their balance and coordination, and most importantly it’s improved their mood and given them hope for the future.”

For more information about the programmes that Henshaws run to help people with sight loss, visit their website www.henshaws.org.uk

London and North West poised for invasion of running Santas