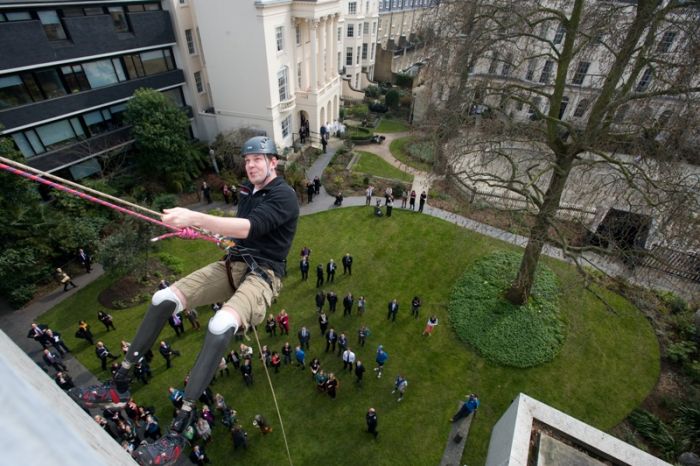 The Royal College of Physicians (RCP) building in London’s Regents Park provided a unique backdrop as the venue for the ‘Pushing Boundaries Rehabilitation Conference’ recently.

The 140 delegates looked up aghast, as they witnessed double leg amputee, Duncan Slater, abseil into the conference from the rooftop of the design award winning building!

The conference, jointly organised by Exchange Chambers, NewLaw Solicitors and Pace Rehabilitation, provided the audience of barristers, solicitors, case managers, claims handlers and prosthetic users with the opportunity to learn (and see demonstrated) some of very latest clinical services and prosthetic advances.

Accompanying John was osseointegration patient Gemma Trotter, who shared her personal experiences of the system that provides a direct attachment of a prosthesis in to the skeletal system. Her success and determination has culminated in Gemma becoming the world’s first above-the-knee amputee spinning instructor!

Carolyn then introduced the audience to ten prosthetic ‘models’ who demonstrated a wide variety of (upper and lower limb) prosthetic devices. Delegates then had the opportunity, during the breaks and lunch periods, to meet the prosthetic users and ask about their ‘real life’ experiences and see the prostheses being used in everyday activities.

An international flavour was provided by representatives from BiOM, from the United States of America, who demonstrated their bionic technology power assisted ankle. The day before the conference, three below the knee prosthetic users commenced a trial with the BiOM device and demonstrated the device at the conference. When a delegate asked one of the ‘models’ how it felt, the audience were audible taken aback when he replied, “It’s like having your leg back”.

The transatlantic company hope to launch the device later this year into the UK and Europe. Pace Rehabilitation will continue to be at the forefront of this latest technological advance.

After enjoying lunch, taking the opportunity to talk with the models and meet Pace patient and Paralympic triple medallist, Jon-Allan Butterworth, delegates adjourned to the RCP’s garden to cast their eyes skyward as former RAF Regiment Sergeant Duncan Slater, made a dramatic entrance into the event.

Expertly guided down, by Jim Bonney (Adventure Rehab), towards the amazed on-looking delegates, Duncan made his first abseil, since being seriously injured in Afghanistan in 2009, to kick off the afternoon session.

With his prosthetic feet safely back on the ground, Duncan joined his Walking With The Wounded (WWTW) counterparts, Ed Parker and Guy Disney, to provide an inspiring presentation about the charity’s successful 2011 North Pole expedition and their forthcoming South Pole Allied Challenge.

Having de-rigged his ropes from the roof of the building, Jim Bonney followed the WWTW team to provide the inspired audience with a presentation about his rehabilitation organisation, based on a military model that offers civilian amputees rehabilitation programmes in an adventure (outdoor) environment.

The conference was concluded by a joint presentation from Gerard Martin GC of Exchange Chambers and Robert Thomas from NewLaw Solicitors, who provided a legal perspective on amputee claims and their case management, which stimulated considerable and healthy discussion.

Discussions were rounded up and the conference was brought to a conclusion by Dr Van Ross, before delegates headed home from an informative and educational event.

Delegate Sue Ford (Bridge Case Management) fed back, “It was one of the best conferences I’ve ever been to. I really felt that the whole day was consistently fascinating and genuinely interactive. My only regret was that I didn’t have some of our amputee clients with me to hear the stories and share in the inspiration”.

Exchange Chambers, NewLaw Solicitors and Pace Rehabilitation would like to sincerely thank all of the delegates, demonstration patients and particularly the RCP staff who provided faultless support and were very accommodating of Pace’s request to suspend an amputee from their building!

Find out more about Pace Rehabilitation at www.pacerehab.com

Walking with the Wounded Charity Race to South Pole