Unless you’ve been living under a rock all weekend, you’ll know that Britain voted to leave the European Union on Thursday.   Social media had a field day. Memes, parodies, inspirational quotes – you name it, the internet had it covered. Here we round up some of the funniest tweets of what was a crazy weekend politically and digitally. Make sure to check out our article on how Twitter reacted to Brexit’s impact on disabled people.   Nicola Sturgeon set off meme generators across the country when she spoke of a second Scottish independence referendum and whether Scotland could block Brexit. 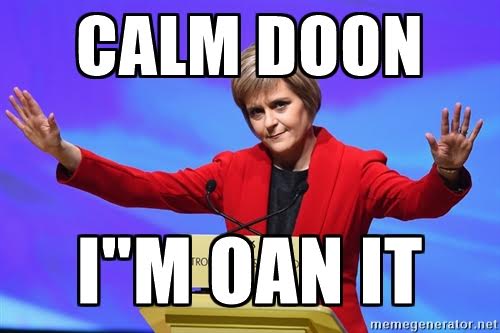 Others remembered the last time the country was horribly divided in opinion.

Nothing has split a country like this since 2002. #EUreferendum pic.twitter.com/NTIMDvyxqd

Some Paralympians found their own way of blowing off steam.

Disability rights campaigners promised to Stay Strong and Fight On.

A v.difficult day for UK & friends in EU. But fight for disability equality & justice will continue. MUST continue. pic.twitter.com/sv4Pt7OryX

Can already start to feel the effects of the pound dropping #bbcreferendum pic.twitter.com/ThMCFArfzg

Scottish band Young Aviators parodied Dandy Warhols with their “Feel So European Just Like You” song discussing Scotland’s position on the Brexit vote.

Jeremy Corbyn came under fire this weekend, with 18 members of the Labour team abandoning ship in protest of his leadership. Rather than resign, as many expected him to, Corbyn remains and has appointed 10 staff in new jobs.

Something to make you smile on a Monday morning ! @adriana__pino #Brexit #funny #gif pic.twitter.com/tgTJ44qyNl

While some people were a bit more zen and took some inspiration from Rudyard Kipling:

In times of uncertainty, we can take inspiration from Kipling's Victorian stoicism & keep plugging away #Brexit pic.twitter.com/MvKsY1ifjU

Got an opinion? Got a MEME? We want to see it! Tweet us to @enablemagazine or come say hi on our Facebook.