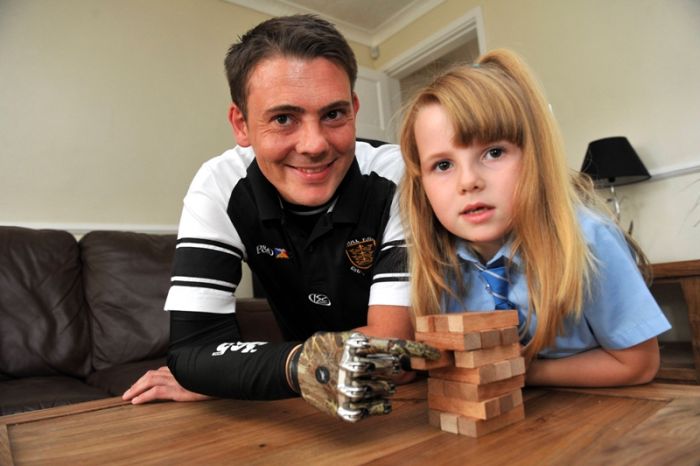 Mike Swainger of Gorsedale, Hull who is one of the first in the country to be fitted with a bionic hand on the NHS. Mike plays jenga with daughter Jodie, 6.

Leeds-based RSLSteeper has another reason to celebrate after its groundbreaking bebionic3 hand was highly commended in this year’s British Healthcare Independent Living Design Awards.

The British Healthcare Awards, which were hosted by BBC Breakfast’s Bill Turnbull at the Millennium Gloucester Hotel in South Kensington, celebrates the UK companies, products and individuals that support people to live more independently.

After hearing of his company’s success in the Prosthetics Category, Paul Steeper, Managing Director of RSLSteeper Prosthetics Division, said:

“It is always nice to receive recognition, but especially so from our peers – we’re all thrilled. As a company, we always look to improve people’s lives. We developed the bebionic3 hand not only to be the most advanced compliant hand on the market but also to be easy-to-use and accessible to as many wearers as possible.

“bebionic3 is the culmination of many years of development but we won’t stand still, we are constantly looking to make improvements so that even more people can reach their full potential.”

Mike Swainger, who was the first person in the UK to receive the bebionic3 through the NHS, said:

“Being an amputee can be so daunting but having a bebionic hand has changed my life. It actually works like a real hand, encourages you to take on different tasks and develop confidence. I am extremely grateful to RSLSteeper and think they thoroughly deserve this accolade.”

The bebionic3 myo-electric hand, which enables users to tackle everyday situations from eating meals and carrying bags to tying shoe laces or shaking a hand, was launched in September 2012. In a short time it has become a global sensation, featuring in over 125 separate news items with radio, press and TV coverage throughout the world, and attracting significant export orders in the USA, Europe, Asia and Australasia.

Earlier in the year, the hand was selected as one of only 15 worldwide innovations to feature at the da Vinci Awards in Michigan, which has become a major international forum for the latest developments in adaptive and assistive technology.

RSLSteeper is one of the UK’s leading providers of prosthetic and orthotic clinical services and a major manufacturer of upper extremity product systems.

Independence at home with Uccello