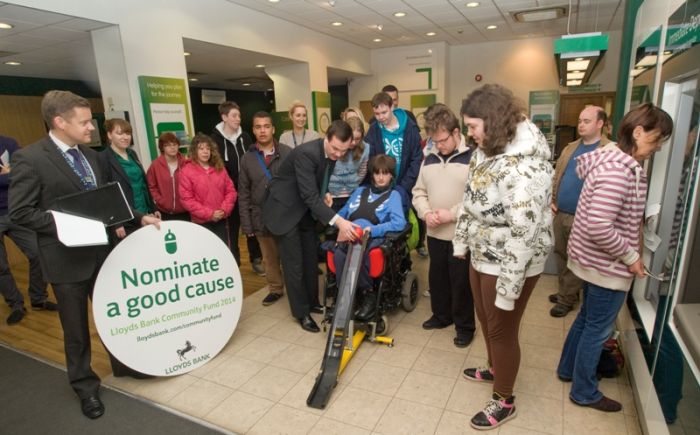 Pupils and staff from Three Ways School in Bath visited the Lloyds Bank Milsom Street branch yesterday to thank the public for voting for them to receive £3,000 in the 2013 Community Fund, and to encourage people to nominate good causes at the heart of their community that matter most to them for this year’s award.

Three Ways, a school based in Bath which caters for young people aged 3-19 with learning disabilities, have used their award to enhance their sporting education. They brought their new Boccia ramp with them to branch to demonstrate how to play the Paralympic sport, and challenged Lloyds Bank colleagues and customers in the branch to a game.

Make a difference in your community

The Lloyds Bank Community Fund 2014 will, for the first time, allow supporters of local good causes to join Lloyds Bank colleagues in putting forward nominations for the community groups they feel deserve a financial award. This new nomination process for 2014 will mean that the chance for local groups to benefit from the Community Fund will start from within the communities themselves.

Lucy Beattie, Project Manager, Three Ways said: “We were thrilled to receive a Lloyds Bank Community Fund award, and have decided to spend our award on providing some sports wheelchairs that will be used across a huge range of sports and enjoyed by many pupils. We were delighted to be at the Milsom Street branch today to highlight how much the support has meant to the whole school community. We’d encourage anyone who knows of, or is involved with, a local good cause to champion them and nominate them for the Community Fund 2014.”

Graham Lindsay, Lloyds Bank Group Director, Responsible Business & Community Affairs said: “Through our Helping Britain Prosper Plan we have committed to being the banking group that brings communities together to help them thrive. We are incredibly proud to be able to support more community groups than ever before to continue their vital work through our Community Fund 2014.”

Nominations for the Community Fund 2014 can be made online until 30 April 2014. To find out more and nominate a community group visit: www.lloydsbank.com/communityfund

The Lloyds Bank Community Fund is helping local people across England, Wales and Northern Ireland to have a positive impact at the hearts of their communities by giving grants to up to 1,332 local good causes in up to 333 communities. Almost 400,000 people are set to benefit from a Lloyds Bank Community Fund 2014 award. Find out more at www.lloydsbank.com/communityfund

Finding Freedom in the Skies