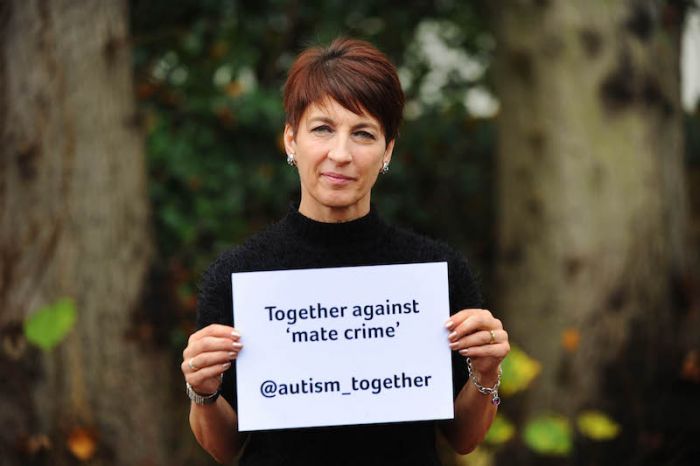 High profile autism champions Dame Stephanie Shirley and Anna Kennedy, OBE, have given their support to a campaign against ‘mate crime’, the bullying of vulnerable people such as those with autism by their own so-called friends.

Dame Stephanie Shirley, named by the BBC as one of the most powerful women in Britain, funds pioneering medical research into autism through her Shirley Foundation.  Anna Kennedy is founder of Autism’s Got Talent plus two schools and a college for young people with autism.

Autism Together, the multi-award-winning North West charity behind the campaign, has adopted the slogan ‘Together against mate crime’ and is asking anyone concerned about this issue to photograph themselves with the slogan and post the image on their own social media channels.  The campaign is timed with Anti Bullying Week (16-20 November).

The charity has been determined to raise the issue of mate crime since its report, published earlier this year (under its former name Wirral Autistic Society), found ‘staggeringly high’ levels of mate crime in Merseyside. Parents told researchers of their heartbreak at having to protect their ‘harmless and extremely vulnerable’ children from bullying.  The report found that:

Anna Kennedy said, “As an autism awareness campaigner and a mum of two young men on the spectrum I have had concerns about the vulnerability of individuals who could get caught up in crime, particularly mate crime, and end up in the prison system. I have actually met people as young as 18 in prison who are on the spectrum and have been victims of mate crime. Raising awareness with campaigns such as this is SO important.”

Chief executive of Autism Together, Robin Bush, said, “It’s fantastic that Dame Stephanie and Anna  have agreed to be part of our online campaign. Mate crime is a hideous, often hidden, form of bullying that needs to come out of the shadows.  We need to show the bullies that we are onto them and to reassure members of the autism community that they are not alone.  We will help them stand up to this issue.”

Numerous organisations have already agreed to be part of the ‘Together against mate crime’ campaign including: Merseyside Police, Progress to Excellence Training, Brain in Hand, the Autism Alliance, OMI Interactive, Sensory Direct and Globo PLC.

Anyone wishing to contribute a photograph can find out more at: www.autismtogether.co.uk/together-against-mate-crime-campaign.

To discuss the issue with the Autism Together team please contact the Rainbow Resource Centre on 0151 666 9960 or email matecrime@autismtogether.org.

A full copy of the mate crime report is available at: www.autismtogether.co.uk/mate-crime-in-merseyside/

Autism Together is the new operating name of Wirral Autistic Society:  A multi award-winning autism charity founded in 1968, employing more than 900 people in Merseyside and the North West and caring for and supporting more than 400 people with autism and social communication difficulties.  It offers specialist support services for families and children, residential care, respite care and supported living and a wide range of day services. www.autismtogether.co.uk.