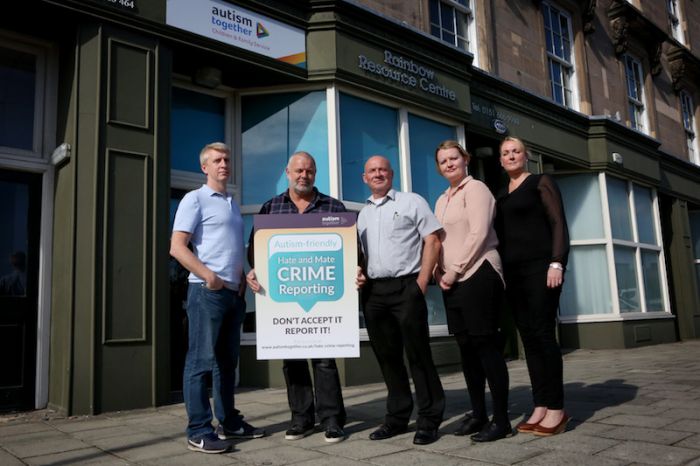 Charity Autism Together today has opened three autism-friendly hate and mate crime reporting centres in Wirral.  The new service begins on the same day the Crown Prosecution Service (CPS) reports a massive 41 per cent increase in prosecutions for disability hate crimes in 2015/2016 compared to the previous 12 months.

The new centres mean Wirral community members on the autism spectrum who have been subject to abuse, bullying, theft, online harassment and manipulation will now be able to report their concerns to specially trained staff in autism-friendly environments.

A  disability hate crime is any criminal offence motivated by hostility or prejudice because of a person’s disability.  Mate crimes are crimes committed against vulnerable individuals by their own friends and supporters.  Research published in 2015* by the charity found that 80 per cent of over 16s with autism questioned had been bullied or taken advantage of by a friend.  54 per cent of 12 to 16 year-olds had had money or possessions stolen.

The reporting centres are being launched during Hate Crime Awareness Week (8-15 October) and will be based in existing Autism Together facilities in Birkenhead and Bromborough.

Autism Together has also partnered with national learning disability charity Dimensions to highlight the issue of hate and mate crimes against vulnerable people.  Nationwide research by Dimensions, also published today, has found that 43 per cent of people with learning disabilities or autism are scared of other people. Seventy three per cent have experienced hate crime – 53 per cent in the last year alone.

Chief executive of Autism Together, Robin Bush, said, “Today’s figures from the CPS point to a sharp rise in disability hate crime.  We won’t let this issue drop below the radar.  That’s why we’ve partnered with Dimensions and many other charities to raise the issue in the public consciousness.**  We’ll be lobbying at government level to ensure vulnerable people are treated fairly and equally within the law.

“We know that one in every hundred people in Merseyside is on the autism spectrum. Our message to them is: don’t accept hate or mate crime, report it. You will be listened to.”

The three reporting centres are at:

Victims of hate or mate crimes can also report their experiences to the police (only call 999 in an emergency) or adult or children’s safeguarding personnel. Alternatively, they can file a report online via the True Vision website at www.report-it.org.uk .

Autism Together has published advice online (www.autismtogether.co.uk/hate-crime-reporting) on how to identify when someone with autism may be a victim of mate crime.

Autism Together is the new operating name of Wirral Autistic Society:  A multi award-winning autism charity founded in 1968, employing more than 1000 people in Merseyside and the North West and caring for and supporting more than 400 people with autism and social communication difficulties.  It offers specialist support services for families and children, residential care, respite care and supported living and a wide range of day services. www.autismtogether.co.uk