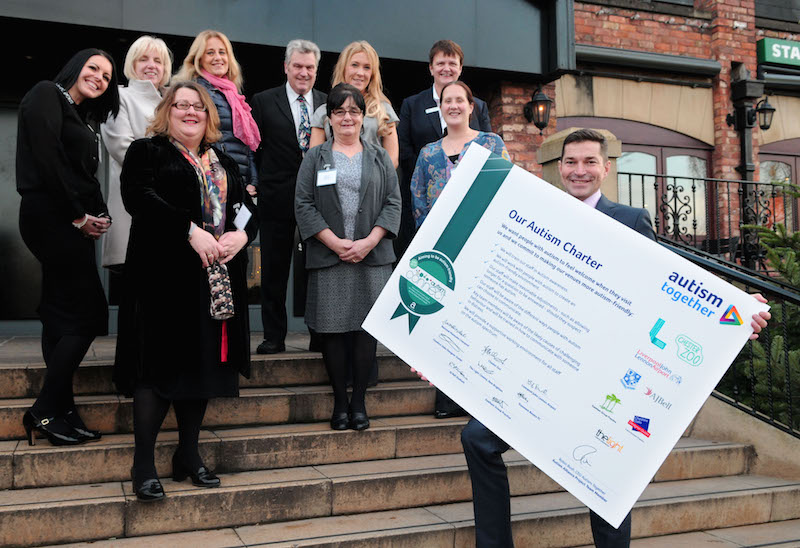 We want people with autism to feel welcome when they visit us.

That’s the message from a group of iconic North West organisations which have signed up to be Autism Champions under a new Department of Health-backed scheme called Connect to Autism.

Chester Zoo, Liverpool John Lennon Airport, Liverpool Museums, the AJ Bell Stadium and others have promised to train their staff in autism awareness and to offer a supportive work environment to staff members with autism.

They join organisations from eight pilot areas around the UK in supporting the scheme, which is intended to tackle social isolation amongst members of the autism community by spreading awareness and understanding.

To show their commitment to the project, the North West Autism Champions have signed a charter penned by people on the autistic spectrum.  It sets out realistic and achievable aspirations for venues to become autism-friendly:

Charity Autism Together, based in Wirral, is co-ordinating the North West region for the Connect to Autism project.  CEO Robin Bush said, “Just like you and I, people with autism want to lead normal lives.  They want to go to the cinema or visit the shops or go on holiday.

“It’s actually easier than you may think to make an organisation autism-friendly.  We can achieve a huge amount by training staff and making small adjustments to venues.  For example, people with autism can take several seconds to process what you have said, so we train staff to wait patiently for an answer.  And where it’s possible, we also encourage venues to offer a quiet space away from bright lights and noise, for people experiencing anxiety.

“We have a fantastic founding team of Autism Champions in the North West and hope that this movement will spread and that this will be the start of great things.”

Jane Hubbard, Head of HR at Chester Zoo, said that her organisation was delighted to be one of the first North West autism champions. “Chester Zoo is all about engaging a guest on a journey.  If just one part of that journey is more delightful, then we’ve achieved our aim,” she said.

Janet Dugdale, director of waterfront venues for National Museums Liverpool said, “We are always looking for ways to improve the quality of our visitors’ experiences.  We’ll be stronger working together in a partnership on this. We’ll be able to apply Autism Together’s knowledge and experience to our museums but also to our staff development.”

Autism Together’s specialist training arm, Autism in Practice, will be coaching the new Autism Champions.  Yvonne Crowhurst, head of Autism in Practice and a national winner of a Great British Care Award in 2015, said, “It is immensely gratifying to see that people are raising awareness of autism. It’s recognised that one in 100 people have autism but you could double that by including those not diagnosed.  This is like throwing a pebble in a pond; the ripples will benefit everyone.”

There are around 700,000 people in the UK with autism and many of them  struggle to be part of community life.  Whereas only 11 per cent of the general population report feeling lonely, a survey by the National Autistic Society found that 41% of adults with autism feel lonely and left out.

Autism Together is the new operating name of Wirral Autistic Society:  A multi award-winning autism charity founded in 1968, employing more than 900 people in Merseyside and the North West and caring for and supporting more than 400 people with autism and social communication difficulties.  It offers specialist support services for families and children, residential care, respite care and supported living and a wide range of day services. www.autismtogether.co.uk.