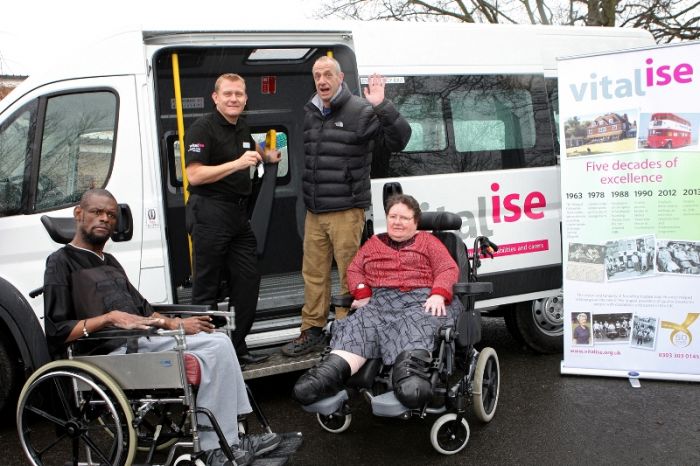 Arthur, a Vitalise Vice President, launched Jubilee Lodge’s three new adapted minibuses, part of a fleet of nine vehicles delivered to Vitalise in February. The purchase of four of the minibuses was made possible thanks to a fundraiser hosted by Samantha Cameron in November last year.

Vitalise Sandpipers in Southport also held a launch ceremony for its new minibuses.  Paul Maynard, MP for Blackpool North and Cleveleys, attended the centre to launch the minibuses, along with guests and staff.

Arthur Smith also took the opportunity to visit one of Jubilee Lodge’s newly-refurbished rooms in order to help promote Vitalise’s ‘Raise a Room’ fundraising campaign by recording a special video message in support of the charity.

The ‘Raise a Room’ campaign aims to raise enough funds to refurbish 50 of Vitalise’s guest rooms across its three UK centres, to help mark the charity’s 50th Anniversary celebrations this year.

Commenting on his visit, Arthur said: “I am delighted to be at Jubilee Lodge today, especially since Vitalise is 50 this year. I remember when I was 50 – well just – and I know what an important milestone it is. So I was really happy to have been invited to welcome the new fleet of minibuses and help launch Vitalise’s ‘Raise a Room’ campaign. I hope everyone gets behind this splendid charity. Happy birthday Vitalise.”

Paul Picton, General Manager of Jubilee Lodge, said: “We’re so pleased that Arthur took the time to come and see us and help us celebrate the improvements we’ve made and kick off our ‘Raise a Room’ campaign in this, our Golden Jubilee year.

“Our new minibus fleet will give us more flexibility in taking our guests out on excursions than ever before and the newly refurbished rooms will provide a top quality environment for our guests.

“All these improvements are proof of our determination to never compromise when it comes to giving our guests truly memorable and revitalising breaks.”

Vitalise is a national charity providing essential breaks for people with disabilities and carers at three accessible UK centres in Chigwell in Essex, Southampton and Southport. Each centre provides 24-hour nursing care on-call, personal support and a range of accessible excursions, activities and entertainment. Vitalise celebrates its 50th Anniversary this year.