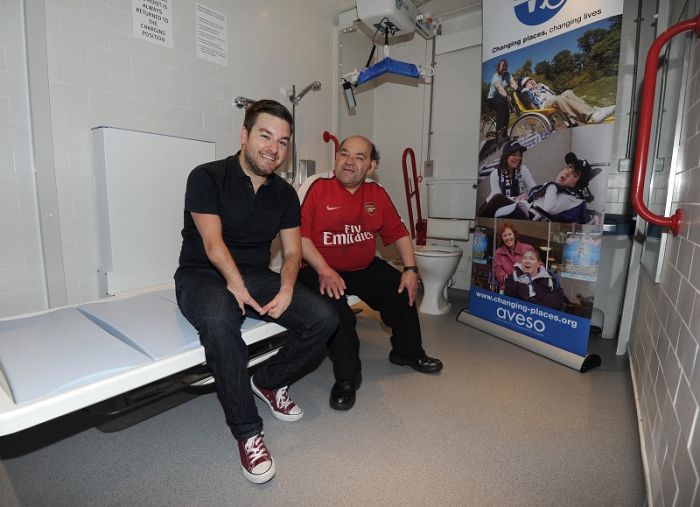 Arsenal Football Club’s Emirates Stadium launched the 600th “Changing Places” fully accessible disabled toilet at the Club’s Premier League game against West Ham last night. Changing Places toilets are larger than a standard disabled toilet and include a height-adjustable bench, a hoist and room for a wheelchair and up two carers.

Arsenal fan and Mencap Campaigns Assistant Leroy Binns who has a learning disability officially opened the facility alongside journalist and presenter and fellow Arsenal fan Alex Brooker, who is best known for his work with Channel 4 and its coverage of the 2012 Summer Paralympic Games.

The Changing Places facility is just one of a number of continued investments the Club makes for its disabled supporters and forms an important part of Arsenal’s equality and diversity campaign, ‘Arsenal for Everyone’ which strives to ensure supporters, staff and everyone connected to Arsenal Football Club feels an equal sense of belonging.

Leroy Binns, Changing Places Champion said: “I have campaigned for a Premier League football club to install a Changing Places toilet for years. Many people with a disability who are huge football fans can’t watch their favourite teams at their ground as the toilets are not suitable for them.”

Alun Francis, Arsenal Disability Liaison Officer, said: “We are all incredibly proud to be the first Premier League stadium to install a Changing Places toilet.  Arsenal values everyone connected to the Club and we want all visitors to the Emirates Stadium to feel like they belong here and enjoy an equal matchday experience without the stress that standard disabled toilets can cause.”

The 600th toilet at Emirates Stadium is a huge milestone for the Changing Places campaign, which for the past eight years has called for an increase in the number of fully accessible toilets in public places so that people who need them can enjoy the same freedoms as everyone else. Changing Places toilets have been installed in shopping centres, museums, hospitals, airports and many other public places such as the o2 and Olympic Park and are now being installed across Europe.

Lucy Hemingway of Aveso who specialise in the design and installation of Changing Places toilets said: “As sponsors of the Changing Places Campaign we are proud to manufacture and recommend the equipment for such a valuable and important facility. The Arsenal FC Changing Places toilet will enable thousands of fans to experience and enjoy the game in the knowledge that both themselves and their family/carer can enjoy a stress free day out. This Changing Places facility sets the bar for every Premiership club”

A Changing Places toilet is a fully accessible toilet with the following additional equipment: a height-adjustable changing bench, an overhead  track or mobile hoist;  a peninsular toilet, privacy screen and enough space for up to two carers as detailed in British Standard BS800: 2009. These toilets should be provided in addition to standard accessible toilets. Find out more about Changing Places at www.changing-places.org

Events venue open to all