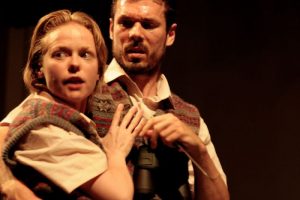 DaDaFest 2012 has drawn to a close and has been hailed a great success, with audiences from near and far coming together to enjoy this internationally renowned festival of disability and deaf arts, the largest festival of its kind in the world.This year’s DaDaFest was the eleventh outing for the acclaimed festival, whose programme is becoming increasingly eclectic and ambitious.

Highlights included the Niet Normaal: Difference on Display exhibition at The Bluecoat which was part of London 2012 festival and featured the work of over 20 highly respected artists from across the globe and renowned percussionist Dame Evelyn Glennie’s first Liverpool performance for over 10 years at Liverpool Philharmonic. Other DaDaFest highlights included 4 special ‘Unlimited’ commissions as part of London 2012 Festival, from Fittings Multimedia Arts with The Ugly Spirit – a new backstage play by Russell Barr combining improvisation and text – comedian Laurence Clark with his show ‘Inspired’ which explored issues around the Paralympics through humour and Unlimited Global Alchemy, a special screening of short films led by British artist Rachel Gadsden in partnership with South African artist and activist Nondumiso Hlwele and The Bambanai Womens Group and a showing of MACROPOLIS by Joel Simon.

DaDaFest not only attracted visitors from as far as Brazil, Australia, India and the USA but also brought performers and artists from 17 different countries to Liverpool.   2,230 people attended DaDaFest live events or workshops and 13,177 visited Niet Normaal with a further 102,467 seeing the exhibition in public areas and 4,348,033 people seeing the BBC Big Screens showing DaDaFest’s work each week.DaDaFest’s long standing commitment to celebrating art from disability and deaf artists by nurturing, promoting and showcasing the artistic talent has established the festival as a key player in not only the international disability and deaf arts circuit but also the mainstream arts world, with critical acclaim growing year on year from both disability, arts and mainstream media.

Ruth Gould, DaDaFest CEO said:  “I am so proud to have such support from the City of Liverpool, who appreciate the diversity of the city’s disability and deaf communities. Arts give disabled people a voice and DaDaFest is all about making sure this voice is heard. I think this year we have been even louder and more provocative than before.”

Julia Keenan, Relationship Manager for Diversity in Arts Practise at Arts Council England added: “Arts Council England values and supports the creative talent of disabled and Deaf people. We have supported DaDaFest for the last 11 years and are pleased to see the growth of its artistic quality and innovation, its reach and engagement with audiences, as well as its partnerships with mainstream arts organisations.”

Find out more about the festival at www.dadafest.co.uk.