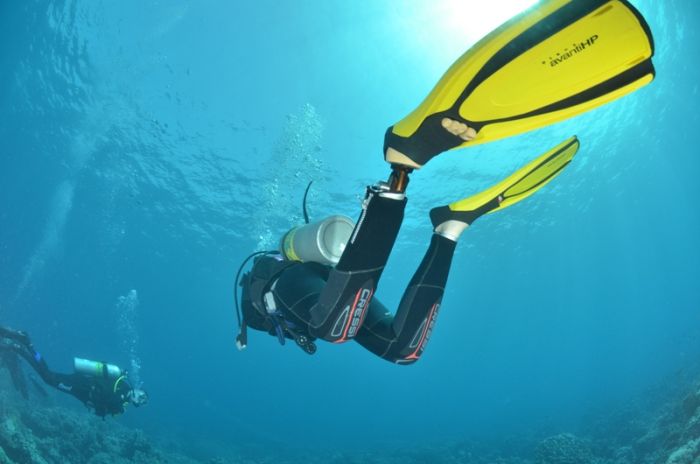 48 year-old London amputee Georgy Evans, who has so far taken on running, scuba diving and horse-riding with the help of a range of cutting-edge prosthetic limbs, is now set to embark on a new challenge on the ski slopes thanks to a specialised prosthetic skiing leg which was developed and fitted by The London Prosthetic Centre.

In 1968, at just three years old, Georgy was shopping with her mother in a store on Kensington High Street when her wellington boot became caught in an escalator, dragging her leg in and trapping it between the side panel and the moving steps. Fire-fighters freed Georgy from the escalator, but within hours of the accident at a nearby hospital, it became clear that her leg needed to be amputated, as she explains:

“I can remember very little of the accident itself but the firemen and surgeon who helped me on the day were fantastic. At that time, there weren’t any warning signs on escalators, and my surgeon, who had operated on a number of other young children due to similar circumstances, campaigned with my family to bring reforms into place. Eventually the yellow lines and warning signs that you see on escalators today were introduced and the escalators redesigned for greater safety.

“Adapting to life with the limited functionality of the prosthetic limbs available at the time, which were made of wood and metal, and held in place with leather straps, was very difficult. A major obstacle for me was on a psychological level, as nobody really talked about disability except in a negative way. I was consistently encouraged to walk as ‘normally’ as possible and not to tell anyone about my leg by hiding it under long skirts or trousers.

“I was also very young, which meant that I needed constant adaptations to match my growth, and walking or running with the woollen, and later cotton, stump socks, which had little to no absorption properties, led to terrible blisters.”

A major turning point came 18 years ago when Georgy, who is an intellectual property lawyer, was approached by Abdo Haidar, currently Consultant Prosthetist at The London Prosthetic Centre, when he was working for the NHS. He suggested that she try a newly developed carbon fibre prosthesis, which had vastly improved energy storage and return, as well as a proper foot that allows her to wear footwear such as walking boots and trainers.

Used alongside newly available silicone gel stump socks, Georgy became able to run or walk as far as she chose to, without experiencing any blisters on her stump and any need to recover afterwards. Georgy also began to use other emerging prosthetic technology, including a prosthesis known as the LA Ankle, which dramatically improves ability to scuba dive and to be fully mobile in and around the sea.

The new prostheses gave Georgy the confidence to embark on new challenges, and in 2006 she went on the BBC programme Beyond Boundaries, pushing herself to the limits of endurance as she trekked, climbed mountains, cut through jungles and kayaked down rivers across Africa. However, Georgy wanted to be able to ski. She continued:

“I tried skiing several years ago with my everyday prosthesis, and it proved to be extremely difficult as my prosthesis would not allow my ski to engage with the snow. I saw an article about how Heather Mills had overcome this and other challenges through the use of a specialist skiing prosthesis from the London Prosthetic Centre, and was delighted to find that Abdo could develop a similar leg for me.

“I also asked about a leg for horse-riding, and was very impressed when Abdo suggested that the skiing leg could be adapted for horse-riding. Through the use of a mechanism which ensures an incredibly secure connection, and an ankle that can be adjusted to point in and down, I can now ride without stirrups, canter and control my horse in a way I simply couldn’t have done before. The London Prosthetic Centre is a wonderful place and the level of care, attention and innovation from Abdo and his team was fantastic.

“There has been a major revolution in prosthetics over the past twenty years, and the new developments available are truly transforming the lives of amputees. The beauty of these advancements is that prostheses can now be endlessly adapted. The reason I do so much now is down to people like Abdo and the other prosthetists I’ve had the pleasure of being treated by over the years, who are so patient and creative. I’m very excited about taking on this next challenge on the ski slopes, and will be heading to Xscape at Milton Keynes very soon.”

“We were determined to develop a prosthesis which would meet Georgy’s exact requirements, and we worked very closely with her for several months, fine tuning the design of the leg at every stage to ensure we did just that. We developed two mechanisms, one which would provide Georgy with the control and manoeuvrability she will need to take to the ski slopes with complete confidence, and another which has been designed to significantly reduce movement, providing her with an exceptional level of stability and balance whilst horse-riding.

“Georgy is a truly remarkable person, who is living life to the full and always taking on new challenges. It’s been a pleasure working with her, and we look forward to seeing her continue to achieve so much.”