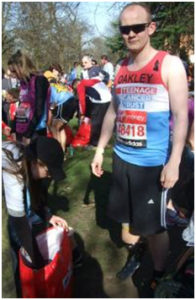 he tragic events at the Boston Marathon arguably provided even greater determination for many of the participants in the London race, just a few days later.

Amongst the thousands of competitors were three amputees runners who had each received their running blades from Pace Rehabilitation, in anticipation of the gruelling 26.2 mile race.
The trio of below-the-knee amputees, Andy Anderson (38, Norwich), Steve Crowley (36, Exeter) and David Oakley (23, Manchester) each had their own goals, not only in terms of their race time, but also raising as much money for their chosen charity as possible.

As former soldiers, Andy and Steve were running on behalf of BLESMA (British Limbless Ex Service Men’s Association), a charity dear to both of their hearts.
Since being injured in Iraq (2010), Steve has benefitted from BLESMA’s support, as he explained, “I want to give something back to a charity that has helped me out and given me some fantastic opportunities since losing my leg.”

Andy, who sustained his amputation in a road traffic accident, previously ran the London marathon in 2011. He recollected, “It was the most amazing experience, a lifelong ambition came true. The psychological impact of feeling I could achieve anything again put me on top of the world. So to be given the opportunity by BLESMA to do it again is incredible!”
When aged 18, David was diagnosed with osteosarcoma, a type of bone cancer, having noticing his ankle was painfully swollen. In recognition of the terrific support he received then he would be running in aid of the Teenage Cancer Trust.

As they each anxiously lined up on the startline at Blackheath, they knew that their journeys had begun a long time before, as Pace prosthetist/Orthotist Howard Woolley explains, “Providing a patient with a bespoke running prosthesis is only the tip of the iceberg when it comes to running for any amputee”. He added, “Considerable dedication and determination is required by the user, especially if they are going to embark on a marathon!”
Steve concurred with Howard’s comments prior the race, saying, “The long cold winter has made for many cold and lonely training runs!”

However, once the race was underway, they were each swept along by the tremendous crowd that lined the route.

As Steve recalls, “I was amazed by the support, to the point where I was becoming paranoid that there must have been another Steve running near to me, as my name was almost permanently being shouted out.”
Despite the challenging conditions on the day, all three successfully completed the course, each in very respectable times:-

Andy smashed 42 minutes off of his personal best time, but it wasn’t without incident, as he recounted, “I’d learnt a valuable lesson after the last marathon not to start off too quickly. I felt good after seeing my family at the 6 mile point, 10 mile and 16 mile points and was well and truly into my stride. Then, at 17 miles I hit it infamous ‘wall’!

Andy continued,”Wow, it really does hit you like a brick! For two miles I slowed right down, but then I saw the BLESMA team which really gave me the boost I needed. After that I refocused, listen to the crowds cheer and got my head down and cracked on. He concluded, “Nothing compares to thousands of people screaming your name. It gives you such encouragement. What a feeling to finish! It was emotional, exhausting and painful, but worth every step!”

Steve also found the experience incredible, as he recalled, “My lasting memory will be the crowd’s response every time I’d stopped at the side of the course to take my leg off. I’d wipe it down and putting it back on. Then, as soon as I got back to my feet and started to run again, there would be a massive applause which was so humbling.”

Taking a deserved rest, the day after the race, David contacted Howard at Pace to say thanks, “I wouldn’t have had a chance at all of running the marathon if it wasn’t for your help.

He added. “”What you’ve done over the last few months really helped me move forward and realise my leg doesn’t have to be a hindrance at all.”

As an amputee who has completed the Marathon himself, Pace prosthetist/orthotist Jamie Gillespie said, “A running device is only as good as the person powering it. In the months leading up to the race, all three guys had put in hours of hard work which enabled them reach the finish line. Everyone at Pace was delighted to see them do so fantastically.”

If you would like acknowledge their achievements (and complete modesty!) by making a donation to their sponsorship fundraising totals, please visit their respective Just Giving pages:–