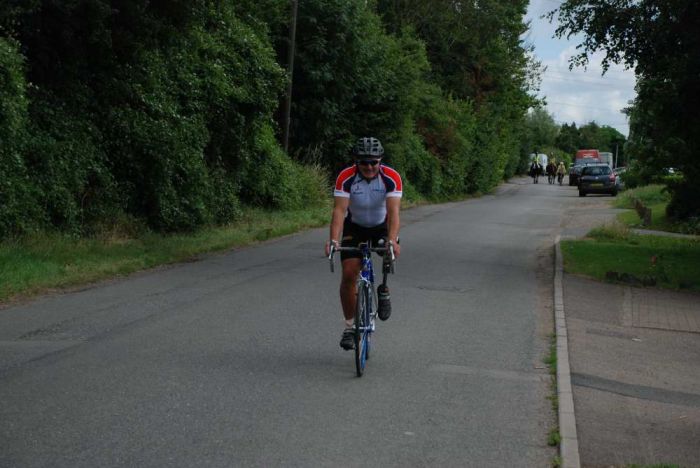 Malcolm, from Chingford, raised over £5000 for wounded servicemen across the UK, in a 5-day event that took 300 riders on a challenging 410-mile route from Paris to London, stopping off at the WW1 battlefields and the Battle of Britain memorial in Kent along the way.

Malcolm was fitted with a Medi NOH5 Hydraulic knee joint to enable him to complete the event, which was fitted by the RSLSteeper team at the Harold Wood Disablement Services Centre in Essex, as he explains:

“The RSLSteeper team have been fantastic and without their support, I wouldn’t have been able to attempt the ride. In addition to sponsoring me, the team at Harold Wood worked with me in the run up, helping me to find a knee joint that would effectively stand up to the stresses and strains of the ride.

“It was a long process, and we went through several different knee joints and adjustments in the process, but they went above and beyond to ensure that I had the perfect solution. Now, I’ve put thousands of hours of riding into the knee, and it’s still going strong.

“The bike ride was a real challenge, but whenever I started feeling tired or sorry for myself, all I had to do was look across and see some of the bilateral and trilateral amputees for inspiration. To think that there were people completing the event using one arm really put things in perspective, and gave me the motivation I needed to keep cycling!”

Malcolm had spent a career working for the Metropolitan Police as a Surveillance Motorcyclist. In 2006 he suffered an accident whilst on an operation, and in 2011, had to have his left leg amputated above the knee.

Regaining his fitness after the accident has been a real challenge, but he has been really pleased with the support he’s received along the way:

“After the accident, I lost a lot of my fitness and it’s been a long road to regaining it. The NHS and RSLSteeper supported me throughout the process, and the specialist prosthetics they’ve provided have enabled me to complete several fundraising challenges including a walk through the Jordanian desert in October 2012.”

“It is true testament to what can be achieved with motivation, commitment and courage. Prosthetics have evolved to enable people to achieve that little extra performance and increase their quality of life. It is one of the most rewarding aspects of a clinician’s job knowing they have had an influence facilitating this”

RSLSteeper offer a wide range of different lower limb prostheses, designed to enable patients to live active lives at home, work and in the community. These include prostheses for everyday use, in addition to a selection of specialist solutions designed for sporting activities.

In addition, the company also provides Prosthetic Best Practice Guidelines (Lower Limb), to assist clinicians to work in a clinically effective manner. This extensive guide contains an informative overview on all major lower limb prosthetic levels, and includes both prescription and casting guidelines.

RSLSteeper provides clinical services both to the private market and in partnership with the NHS in the UK. With around 90 state-registered clinicians and 140 technicians, the company provide clinical services to some 200,000 patients every year.