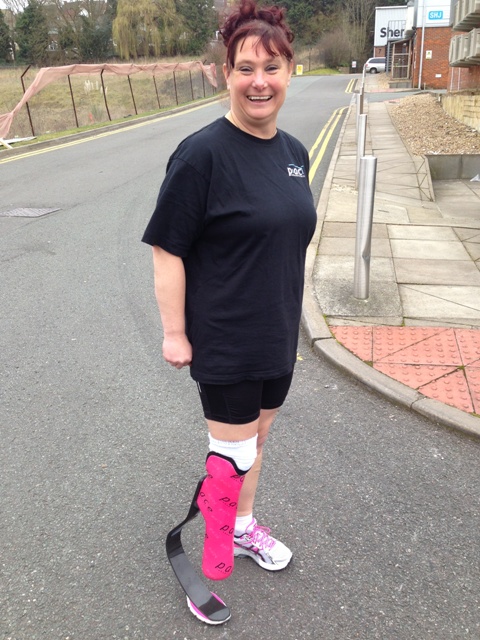 After almost three years of battling and struggling, Helen Chapman (46) from Walton-on-the-Naize (Essex) is tickled pink to finally have a bespoke running prosthesis and can’t wait to tackle the 2014 London Marathon next month.

When Helen collected her striking new prosthesis recently she said, “Today is a huge and very special day for me.  Its been one hell of a rollercoaster ride of tears, stresses, rejections, but finally my dream of being able to run properly with the right equipment is being realised”

Helen recalls, “I adapted well to using a prosthesis and soon wanted to participate in sporting activities that I’d previously enjoyed, particularly running”.  However, Helen realised that her everyday limb wasn’t suitable, as she recalls, “When I tried to run the foot actually snapped off!  That happened on three occasions!”

Undaunted, Helen focussed on obtaining a specialist running prosthesis, “I made three applications to my local Primary Care Trust, but each time it was rejected.  I was even told that it was impossible to make me a running prosthesis due to a lack of clearance from my stump to the ground.”

Following a clinical assessment, Pace Prosthetist Paul Richardson was confident of being able to provide Helen with a suitable device.  As he recalls, “I recommended a design in my report that utilises a long carbon fibre ‘blade’, attached to the back of the socket.  This would provide Helen with significantly improved performance, energy return and shock absorption.”

Delighted that a prosthesis could be made to meet her needs, Helen had her next hurdle to overcome.  She recalls, “Despite the report, I was still denied approval from the NHS.  But I wasn’t going to be deterred, so began fund raising myself.”

Through her own dogged determination, Helen set up a Just Giving page and managed to successfully obtain funding from several charities, including Arctic ONE, The Colchester Catalyst and Limbpower, to proceed with Paul’s recommendations.

At her third clinical appointment, having been cast and fitted with a test socket, Helen took her first ever running steps on a specialist running device.  As she recalled, “It was amazing, the energy return from the Ossur Cheetah blade made running so much easier and felt more natural.”  Adding, “It made me realise just how much I’d struggled for the past few years on an inappropriate prosthesis.  I felt released on the blade!”

Happy with the comfort and function of the device, Helen then headed to Silverstone to test the prosthesis out, in half marathon!  After successfully completed the 13.1-miles, knocking 25 minutes off of her personal best time in the process, the prosthesis was returned to Pace to be finished in Helen’s favorite colour, shocking pink.

When an emotional Helen collected the vivid prosthesis she said, “My dreams have now been turned to reality.  I can’t thank everyone enough for their help and support.  It makes me the happiest and most grateful person ever.”

Matt Kirby from Arctic ONE, a charity that helps able and disabled people get into sport and were one of Helen’s benefactors said, “We are pleased to have assisted Helen and look forward to seeing her training and competing at future events. We hope we can help many more people in the future get involved in sport to achieve their dreams by providing guidance, equipment and coaching.”

Matt’s well wishes were echoed by Colchester Catalyst Charity’s Wendy Larkin who congratulated Helen on her never give up attitude and said, “Our charity is absolutely delighted to make a difference to Helen and we wish her many hours of fun!”

Helen’s ‘hours of fun’ will now be filled with training preparations for the London Marathon.  She concluded, “Previously I walked the entire race.  This time, thanks to so many wonderful people and the right equipment, I know I can run it!”  Adding, “It’s taken me several years, but I’m finally back to my running and absolutely loving it!”

At the London marathon Helen should be easy to spot, with her prominent pink prosthesis and a smile a wide as the Thames!

Find out more about PACE Rehabilitation at www.pacerehab.com

Disabled athlete accused of being “mis-categorised” in the Paralympics