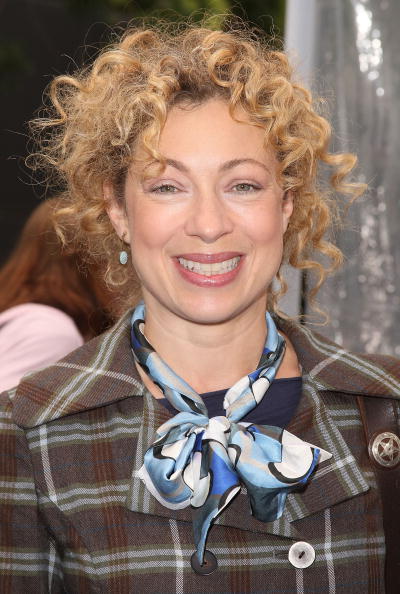 With her mane of pre-Raphaelite curls, open, smiley face and effortless ability to put you at ease, there is something very likeable about Alex Kingston. The Brit actress, who made her name as Dr Elizabeth Corday in US smash hit ER and latterly took on geek icon status as River Song in Doctor Who, is that rare thing in a Hollywood-based actress – she’s remarkably down to earth.

And that, in part, may be down to her upbringing. Born in Epsom, Surrey, to butcher Anthony Kingston and his German wife Margarethe, Alex had a fairly typical childhood of playing in the street with neighbours and games of make believe, the eldest of three daughters.

It’s middle sister Susie, however, that we’re talking about today – and she is part of the reason why Alex has managed to keep her feet firmly on the ground.

Now in her late 40s, Susie was deprived of oxygen at birth, leaving her mentally and physically disabled. Alex’s mother gave up work to care for her daughter full-time, which she continues to do today as she approaches the age of 80.

Part of the family

“My parents have been incredible,” Alex says straight away. “Susie has always been part of our lives. She lived at home, went to school and we’ve all gone on living our lives with her very much part of the family.”

You can tell this simply from the warmth with which Alex speaks of her little sister. While realistic (“When I was very young, she would sometimes make a noise and I’d be certain that she was saying a word. I’d get really excited – I didn’t understand that that wasn’t going to happen”), she is also immensely proud of Susie and the place she has in their family unit.

“I remember the day she actually walked,” she says fondly. “It was the day my mum came home from hospital with my baby sister. Up until then, Susie literally had scooted around on the floor. We were all at home and everyone had come to see the new addition to the family. We were at one end of the room and Susie was at  the other. She literally pulled herself up against the table and started stepping towards my mum and baby sister – which was amazing. Everyone just burst into tears! After that moment, she walked all the time. It was like she suddenly found something incredible for her to do.”

Susie requires 24-hour care. As well as not being able to walk until she was about eight, she can’t speak, has erratic sleep patterns which keep the whole house awake and Alex’s parents bathe her, dress her and feed her. She can’t use the toilet either and uses adult nappies. Susie spends her days at a day centre for adults with disabilities, which gives her a solid routine and her parents a break.

Bar very occasional short breaks at a local facility once or twice a year – a service which is being threatened by cuts – the Kingstons don’t get any help with Susie’s care, but in part, this is down to choice.

“My mother is a very proud woman,” Alex emphasises. “She has had, in the past, social workers come to suggest that she has help but she’s declined it. She feels that she can do it quicker because she feels she knows my sister’s rhythms and how she behaves, what she likes to eat. They’re so in tune that she feels that a social worker wouldn’t be a help; it’d be more of a hindrance.”

Fortunately, both Anthony and Margarethe are fit and healthy (“My mother looks like she’s in her mid-60s,” Alex points out), but there are other areas where they need help and they’re fighting for it.

“I have been at the house and listened to my mum on the phone for an hour, talking to somebody who is cutting back the number of nappies that Susie requires for a week,” she recalls. “To see my mum pleading for an extra ten nappies a week is just… I find it so frustrating, and also offensive actually. Parents who make the decision to look after children who are absolutely dependent upon them – they’re not being paid, they’re saving the government hundreds and hundreds of thousands of pounds by caring with love and compassion. To be denied the basics, or to have to fight for the basics, really angers me.”

For the thousands of people caring for loved ones across the UK, it’s often the system which poses the biggest difficulties, rather than the caring itself – something which Alex and her family would like to see change.

“Each person is an individual with their own problems and needs,” Alex says. “And I know it’s probably hugely expensive to treat each case individually, but it’s needed. And I think also that services need to listen to the families that take care of their children. I’d like carers to be heard and respected. It’s not just about being heard though – a politician could read this and say, ‘Well, we listen.’ But what they do is nod then not do anything. Every carer who asks for something – who pleads for something – is doing it out of love. It’s about respecting the requests and the demands that carers have.”

Before we end our conversation, Alex asks if she can make one last point, away from the politics and the difficulties that many carers like her mother and father face.

“Having observed my parents, particularly my mother, devote their entire lives to my sister – they are really the most extraordinary people,” she says gently. “They really are. It’s not easy, what they do. The devotion is just… It’s incredible.”

You can’t really say fairer than that.

Disability and the Glitterball with Paralympian, Will Bayley