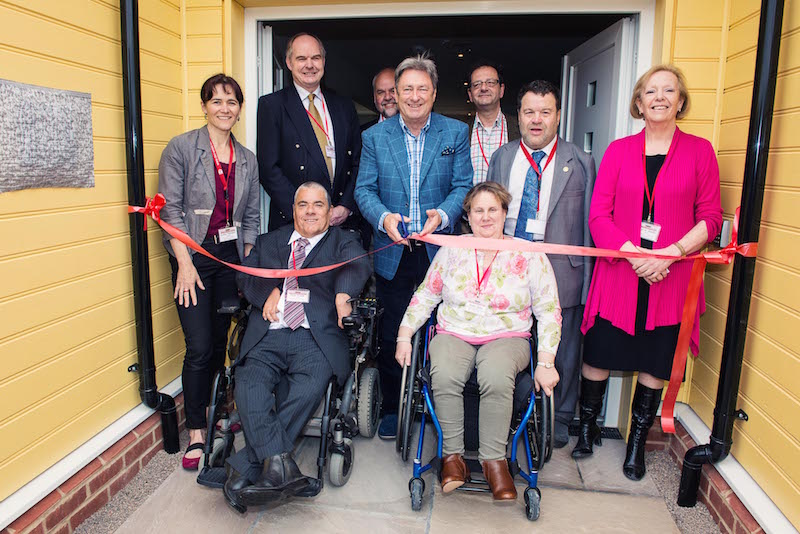 A Hampshire-based mouth and foot painting artist has formed a collaboration with a Polish house builder to build the first fully accessible state-of-the-art holiday homes in the UK for people with disabilities.

A board member of the international Association of Mouth and Foot Painting Artists (AMFPA), Tom Yendell came up with the idea of ‘Flat Spaces’ following a conference several years ago in the USA, where it was reported that up to two billion dollars was lost annually to tourism as disabled people did not travel.

Some years later, when Polish timber-frame house builder, Danwood, made such a good job of building Tom’s own home in Alton for himself and his family, he decided to approach them with the idea.

Now a registered charity, construction of the first Flat Spaces bungalow is now complete and was officially opened in May 2015 by gardener, broadcaster and novelist, Alan Titchmarsh MBE DL, at Watercress Lodges, Ropley in Hampshire.

Having worked with people with disabilities for over 30 years, Tom is acutely aware of the problems they face when staying away from home, as they simply don’t know what to expect and are often disappointed with the accessibility of their accommodation.

“Research shows that many severely disabled people rarely go on holiday because they think they won’t be able to cope,” says Tom, who was named Man of the Year in 1988 for his work with the less-abled. “For the first time in the UK, Flat Spaces is offering purpose-built holiday homes to people with mild to severe disabilities, knowing they can have complete confidence that the accommodation will be totally accessible in whichever Flat Space they visit”.

The three-bedroom bungalow will include an OpeMed ceiling hoist that can travel between bedrooms via an en-suite wet room, a Clos-o-Mat Lima Lift toilet, two level access showers, variable-height beds, rise and fall kitchen worktops and dining table, and a carer call system. The spacious interior will allow numerous wheelchair users to navigate with ease.

Tom designed the bungalow with one of Danwood’s architects, with input from various disabled groups and individuals, to ensure that the 186 square metre property meets the Flat Spaces’ motto of ‘Access Assured’, so that disabled visitors will be catered for as well as, if not better, than in their own home.

“I would only trust a company like Danwood to build Flat Spaces properties as everything has to be built to a very high standard and specification,” continues Tom. “Danwood works to a fixed price and a guaranteed timetable of just eight to ten weeks’ construction time, which will be important when we begin to erect Flat Spaces further afield.”

The site of Flat Spaces Ropley is a rural location in Hampshire that overlooks the famous Watercress Line Steam Railway. Popular with steam enthusiasts and people who love the countryside, the location is in easy reach of the historic town of Winchester, pubs, restaurants and visitor attractions, such as Jane Austen’s House Museum and The Oates Collections.

Spring into action with The Rough Guide to Accessible Britain