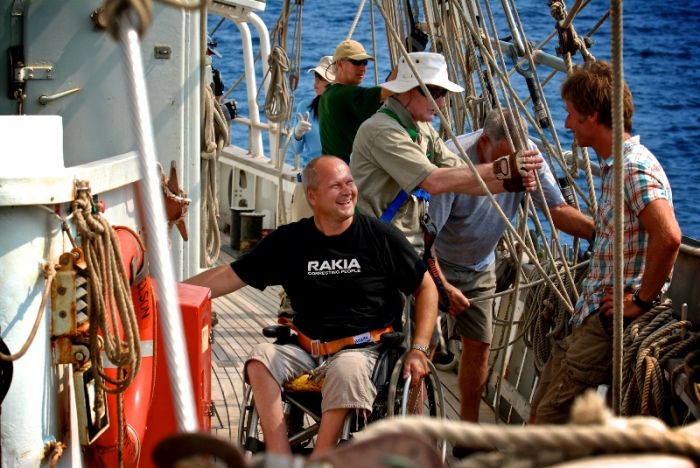 Lord Nelson, the Jubilee Sailing Trust (JST)’s accessible tall ship, will be arriving in London on 19th September after being away for almost 2 years on her epic Norton Rose Fulbright Sail the World Challenge.

Sailing down the Thames, accompanied by Tenacious (the JST’s second ship) she will be arriving to a superb homecoming celebration, organised by the sponsors of this impressive challenge – Norton Rose Fulbright.

Lord Nelson set sail from Southampton in September 2012, where she sailed across the Atlantic Ocean carrying the Olympic Torch to Rio de Janeiro, Brazil. From here she has sailed to South Africa, avoided pirates as she crossed the Indian Ocean to Kochi, India, enjoyed a warm Australian welcome when she took part in the International Fleet Review in Sydney Harbour, and was the first mixed ability vessel to sail around the infamous Cape Horn in southern Chile, in February this year.

She has crossed the equator 6 times, travelled over 45,000 nautical miles and visited over 30 countries, all to promote the messages of inclusion and equality. Lord Nelson is currently in Canada and will be departing on her homecoming voyage from Halifax on the 14th of August.

The 55-metre tall ship, which is operated by the Southampton based charity – the JST, is one of only two fully accessible tall ships in the world (the other being Tenacious) and is sailed by both disabled and able-bodied crew. Features such as braille signage, wheelchair lifts between decks and hearing loops, hand rails and a bowsprit wide enough to accommodate a wheelchair, mean a large variety of physical disabilities can be accommodated on board.

The ethos of the JST is to focus on what people are able to do, rather than what they can’t, and a buddy system on board pairs able-bodied and disabled crew during a voyage so they can provide each other with mutual support.

You can come and join in Lord Nelson’s homecoming celebrations which are being held at the Norton Rose Fulbright offices by Tower Bridge, London, where you’ll get to meet the crew and see this fantastic tall ship arriving home in style. Find out more at www.jst.org.uk or call 023 8044 9108 for more information.

What is World Autism Awareness Week?