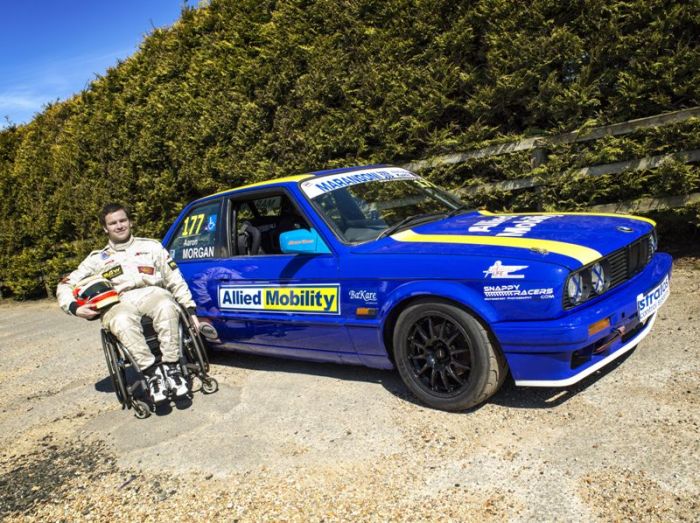 Allied Mobility, the UK’s leading supplier of wheelchair accessible vehicles, is delighted to be named as racing driver, Aaron Morgan’s main sponsor for 2013.

22-year-old Aaron, from Basingstoke, has been racing since the age of seven but a motocross accident in 2006 left him paralysed from the waist down.  Determined not to let his disability get in the way of his passion, the young driver underwent ten months of gruelling rehabilitation.

Over the course of the following six years he passed his driving test in a specially adapted vehicle, graduated from Brunel University with a degree in Sports Science and became the youngest ever disabled person to be awarded a motorsport racing license.  Aaron managed this using only his hands to operate the vehicle controls.

All of the competitors in the Marangoni Production BMW Championship drive a BMW E30 3-Series making individual driving skill the difference between winning and losing.  This exciting championship sees competitors race at some of the finest circuits around the country.

Aaron has been competing in the Championship since 2011 and this season will see him pit his racing skills against 32 other drivers as they battle it out till October.  Upcoming races include famous tracks like Snetterton, Brands Hatch GP, Outlon Park, Cadwell Park, Silverstone Arena GP, Donington Park and Castle Coombe.

Allied Mobility is delighted to be unveiled as Aaron’s sponsor for the coming season.  Like our page on Facebook (www.facebook.com/alliedmobility) and follow us on Twitter (www.twitter.com/alliedmobility) for regular updates and photos on Aaron’s progress.

Find out more about Allied at www.alliedmobility.com

Exeter welcomes a world of worry-free motoring this summer