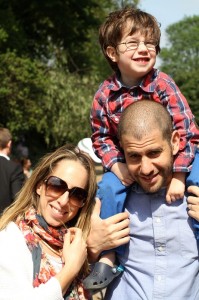 A new voice at Enable, dad Matt Davis reflects on the changes to his holiday experience since his son Isaac was diagnosed with autism…

This year we took a holiday from holidays, so to speak. It was at times arduous (mainly for my wife Eliza), relentless and repetitive. But it was also as relaxing as it could be and reassuringly routine for our son Isaac, who has autism. And that was all that mattered.

Since Isaac was born, my relationship with holidays has been fractious. A trip to a peaceful Mediterranean resort a few months before his diagnosis reached the pinnacle of distress for him and despair for us. What we know now – that routine is his oxygen, his thinking rigid, and he’s never a second away from sensory overload – means we were fighting a losing battle daily.

It rips my heart out how we were (unknowingly) letting him down. From forceful shepherding through maddening airports, to inconsistent mealtimes, to improvising the day’s events, to a need for armbands in the pool.

But out of the chaos came the calm of successive UK-based holidays. Where mapping out the journey right down to the service station visited, meant Isaac knew what, where and when, and was a delight and delighted as a result. Photos of the cottage before we got there, his favourite books, specific foods. We’ve had an all-out autism-friendly couple of holidays.

And then, last year – a big bold breakthrough. Engineered and orchestrated by my wife, we ventured on to a plane to a little house we knew in a cosy complex with a swimming pool. Despite Isaac being able to learn and speak in his own way and express himself better all the time, he and we are very much governed by autism. So meticulous planning was absolutely critical with visual cards navigating us through the hardest bit: the airport with all its twists and turns.

He knew we were going “in an aeroplane, in the sky, to somewhere hot”. He could “splash about with pants and a jacket” (an inflatable one). He’d have all his books and DVDs and food with us.

My wife’s preparation meant minimal surprise and small but consistent rewards led to a successful experience. A half hour – allowed for in the schedule – going up and down the escalators, provided sensory relief for him. On the plane, he actually enjoyed the turbulence which confirmed how topsy-turvy his balance and physical being is. It was a liberating and lovely holiday.

We stayed put this year. Isaac was fine with it – he doesn’t seek adventure, escape from the norm. His holiday was blissful as he went on the tube every day, printed pictures, and was thrilled that days were panning out as planned. He also got to kiss his new baby sister Tabitha every day, which was enough change for him to deal with for one summer.

Matt Davis is a Parent Patron for Ambitious about Autism, www.ambitiousaboutautism.org.uk, the national charity for children and young people with autism. He blogs about his family’s life at mysonisaac.blogspot.co.uk. Follow Matt on Twitter: @copyiswritten